The Big Ten tournament comes a week early in 2018. The idea to play a condensed schedule just so they could avoid a conflict with the Big East and play their tournament inside Madison Square Garden wasn’t a good one–Big Ten commissioner Jim Delany now says it “wasn’t healthy… We won’t do it again this way”–but it’s still must-watch basketball no matter when it happens.

With the tournament starting Wednesday, February 28, the first- and second-round games, as well as the quarterfinals, will all be broadcast on Big Ten Network, while the semifinals and championship will both be broadcast on CBS (full schedule and bracket here). If you don’t have cable or can’t get to a TV, you can watch a live stream of one or both of these channels by signing up for one of the following cable-free, live-TV streaming services:

FuboTV: Both Big Ten Network and CBS (live in select markets) are included in the “Fubo Premier” channel package. You can sign up for a free 7-day trial, and then you can watch both channels live on your computer via the FuboTV website, or on your phone, tablet or streaming device via the FuboTV app.

Hulu With Live TV: If you want an extensive Netflix-like on-demand streaming library in addition to live TV, Hulu now also offers a bundle of live channels, including both Big Ten Network and CBS (live in select markets). You can sign up right here, and you can then watch a live stream of both channels on your computer via the Hulu website, or on your phone, tablet or streaming device via the Hulu app.

Amazon Prime: This is an option for the CBS games only. If you have Amazon Prime or want to start a free 30-day trial of Amazon Prime, you can watch a live stream of your local CBS channel via the CBS All-Access Amazon Channel, which comes with a 7-day free trial. Once you’re signed up for both Amazon Prime and the CBS channel, you can watch CBS live on your computer via the Amazon website, or on your phone, tablet or other streaming device via the the Amazon Video app.

CBS All Access: This service lets you watch a live stream of your local CBS channel, as well as all of CBS’ on-demand library. It’s ultimately the same as the above option, only you’re watching through CBS’s digital platforms rather than Amazon’s. You can sign up for a free 7-day trial, and you can then watch CBS live on your computer via the CBS website, or on your phone, tablet or streaming device via the CBS app.

Michigan’s Cinderella run last year ended a streak of 15-straight Big Ten tournament champions being seeded No. 3 or better, but with Michigan State and Purdue favored well above the rest of the pack, it seems that trend should resume this year.

Both ranked inside Ken Pomeroy’s Top 5, and both looking to strengthen their case for a No. 1 seed come NCAA tourney time, the Spartans have won 12 in a row and could potentially have a chance to avenge their only two conference losses of the season (Michigan in the semis, Ohio State in the final), while Purdue unraveled in early February following a 12-0 conference start but responded with three consecutive W’s to close the season.

The two biggest challenges are likely to come in the form of the only other NCAA tournament locks in the Big Ten field: Ohio State, who beat both Michigan State and Purdue but also lost twice to potential quarterfinal opponent Penn State, and Michigan, last year’s tournament champion who again seems to be peaking at the right time with five-straight wins.

If you’re looking for the team with the most to prove in New York this week, it has to be Nebraska. The Cornhuskers went 13-5 in Big Ten play but remain firmly on the bubble because their best win is at home against Michigan. If they’re going to sneak their way into the Big Dance, they’ll likely need to at least advance to the championship, which probably means going through Michigan and Michigan State.

Finally, it’s unlikely anyone makes a 2017 Michigan-esque run through the tournament, but there are two intriguing deep sleepers. Penn State doesn’t currently have a resume worthy of the NCAA tournament, but they rank 32nd overall in Pomeroy’s rankings, they have a take-over star in sophomore Tony Carr and they have proven they can hang with the best (two wins over Ohio State and a three-point road loss to Purdue). And then there’s Wisconsin. They need to run the table to extend their streak of 19 straight NCAA tournament bids, and while that’s unlikely, they’ve knocked off Purdue and played Michigan State to the wire in the last two weeks, so their confidence will be high inside The Garden. 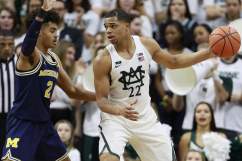 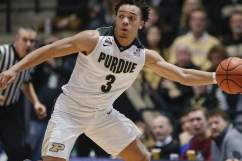 Read More
Live Sports Streaming, OTT
The Big Ten tournament happens a week early in 2018, but it will still be as entertaining as ever. Here's how to watch every game live online.