Danny Amendola has quickly become one of the most dependable offensive players on the Patriots roster. He doesn’t strike a particularly imposing figure on the field, but the wide receiver makes the plays when he has to and he’s got plenty of fans cheering his name this postseason – including his family.

The Texas native grew up around football and, now, with his sights set on a second-straight Super Bowl, Amendola knows he’s got his own personal cheering section in Minnesota. Here’s everything you need to know about the Amendola family:

One of five children, Culpo has been standing in the spotlight for years. She signed her first modeling contract in 2010, when she was just 18 years old, before winning the 2012 Miss Rhode Island and Miss USA competitions.

Culpo went on to represent the United States in the 2012 Miss Universe pageant, becoming the first American to win the title since 1997. Although she found success on the pageant circuit, Culpo was quick to admit that her family was surprised by her interest, saying they “looked at her like she had three heads” when she first voiced her decision to enter the Miss Rhode Island competition. After all, she was already an accomplished musician at the time and walking away from that career came as a shock to her family.

My parents said that they were embarrassed I was going to do pageants. They said it was narcissistic. So much of my life had been dedicated to the cello, and they couldn’t understand why I wouldn’t pursue that— or at least pursue the Miss America pageant, where you can showcase your talent in music.

Now that her reign as Miss Universe is over, Culpo, who graduated from Boston University, is turning her attention to what’s next. She is currently a brand ambassador for Pencils for Promise, which helps build schools in underdeveloped communities in Guatemala, and has been the face of a handful of brands, including L’Oreal and Kipling, and currently represents Rampage clothing and GHD hair products.

2. The Pair Made Headlines After the Patriots’ AFC Championship Win

Culpo, a Rhode Island native, was on hand at the Patriots AFC Championship victory over the Jacksonville Jaguars, posting in-game reactions on Twitter and turning a few heads after the final whistle went off.

Of course, the couple had plenty to celebrate.

Not only are the Patriots heading back to the Super Bowl – again – Amendola was a force to be reckoned with in the championship tilt. He hauled in seven passes on nine targets for 84 yards and two touchdowns, including the game-winning score with less than three minutes in regulation.

Well, that’s not something you hear every day.

Amendola’s father, Willie, made headlines in 2013 when he sued Cowboys Stadium for $1 million. The lawsuit stemmed from an incident with a golf cart at the Stadium while Willie was coaching his high-school football team, Spring Dekaney, in the 2011 Texas 5A Division I state championship game.

Spring Dekaney won the game and Willie was at midfield for a postgame interview when a runaway golf cart ran over him and several other people. Willie was dragged nearly 30 yards by the golf cart before he was able to jump off. He wasn’t seriously injured, but he sued the Stadium for “past and future physical pain and suffering; past and future mental anguish and past and future medical expenses.”

The video became a bit of an internet sensation afterward, a popular gif across a handful of social media sites and even the subject of a COMPLEX feature in 2015.

It’s all in the past now for Willie, however, who is now the athletic director at Spring Independent School District in Houston, Texas.

4. His Mom, Rose, Took Him to His First Football Game

Amendola, who grew up in Texas, has always been a big fan of the game and he’s got his mom to thank for that. He went to his very first football game when he was just four years old, sitting in the stands while his dad was coaching. He detailed the moment to At Large Magazine:

It’s the earliest memory I have. I still have a photograph of my dad from that game. [Football in Texas] means everything. I was thrown into the “Friday night lights” program from an early age. The town would shut down and everyone came out for the football game. It supported the local high school and it created as much of a next-level atmosphere as there could be.

Marie didn’t just help spark her son’s interest in the game that would shape his career. She’s also a Boston native. In fact, when Amendola was growing up, he frequently visited the area when he was growing up and, after signing with the Patriots said, still having family there “made the transition easier.” 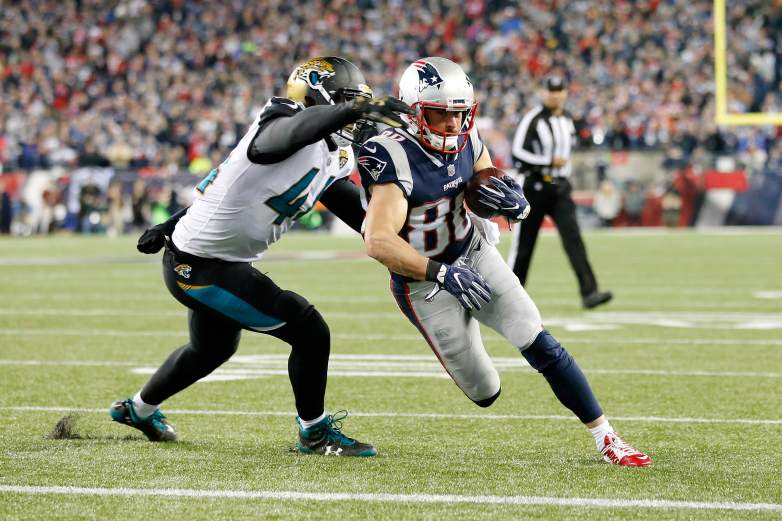 Danny’s older brother Matt, now 37, was a defensive back for the Baylor football team in the early 2000’s and while his career was marred by injury, he still notched a handful of appearances on the field. Matt played in six games during his redshirt freshman season, suiting up at free safety against Texas, Minnesota, Iowa State, Texas Tech, Texas A&M and Nebraska. He notched 40 total tackles, one interception and racked up an impressive 13 tackles, including eight solo, against Minnesota.

He also appeared in six games in 2011 after missing the first five matchups of the year with a knee injury.

Matt, like Danny, played his high-school ball at The Woodlands High School in Woodlands, Texas. He racked up 236 career tackles and was named Defensive MVP of District 15-5A and Houston Touchdown Club Player of the Year finalist as a senior.