New England Patriots wide receiver Julian Edelman welcomed his first child in November 2016 with a woman named Ella Rose. Rose is a Swedish model who met Edelman sometime in 2014 and dated him casually for about two years before she got pregnant with his child.

Rose and Edelman welcomed their daughter, Lily, in November of the following year. At first, Edelman denied that he was the father of Rose’s baby, but after she filed a paternity lawsuit, Edelman acknowledged that he was indeed Lily’s father.

Despite reports that Rose had planned to give birth in Massachusetts, she welcomed her first-born in California, where she resides. According to TMZ, Edelman was able to jump on a plane and get to Los Angeles in time to witness the birth of his little girl.

Lily was 8 pounds, 5 ounces when she entered the world at Cedars-Sinai Hospital.

About a week after her birth, Edelman posted the following photo on Instagram, welcoming his daughter to his family. The picture was taken in the hospital shortly after Lily was born.

my biggest #wcw of all time, happy to welcome a new squirrel to the tree, my baby girl lily #proud

Shortly after Lily’s birth, Edelman flew back to Massachusetts to return to his team. On Sunday, December 4, 2016, Edelman and his team played the Rams, beating them 26-10. Although Edelman didn’t get any touchdowns in the game, he made eight catches for 101 yards.

2. Rose & Edelman Are Not in a Romantic Relationship, But Are Working Together to Co-Parent Their Daughter

Nap tyme with my little pumpkin

Rose and Edelman are said to be co-parenting their daughter to the best of their ability. While the two aren’t in any kind of official relationship together, they have become good friends, bonding over their child.

A TMZ report confirming Lily’s birth stated that Rose and Edelman had been “friends with benefits” for “the past few years,” but added that the two were not in any kind of romantic relationship.

Both Rose and Edelman post about their daughter on social media. Just a couple of months ago, the two shared pictures of their daughter in honor of her first birthday.

“One year ago today you came into my life and showed me what real unconditional love felt like. All I want to do is to protect you and see you grow into the sweet soul that you are. I’m so blessed to have you in my life. Happy birthday my sweet Angel,” Rose captioned a series of Instagram photos from Lily’s first birthday part in California.

“Happy 1st Birthday to my little baby girl. I want you to stay this big ;) stop growing so fast,” Edelman posted on his Instagram page, along with a photo of him and Lily on the beach.

It does not appear that the two celebrated Lily’s birthday together, but they each got to spend some time with her around her birthday.

3. Rose Filed a Paternity Lawsuit Against Edelman, Who Didn’t Publicly Acknowledge That He Was Lily’s Dad Until 2 Months After Rose Filed Papers

give dada a kiss #Thanksgiving #mylilturkey

A short time after Rose found out she was pregnant, she told Edelman, but reports indicate that he contested Rose’s claim.

When Rose was about five and a half months pregnant, she filed paternity documentation in L.A. Superior court, naming Edelman as the father of her unborn child. According to the Daily Mail, Rose’s lawsuit “sought to establish that Edelman was the father of her then-unborn baby.”

At the time, Edelman’s agent, Don Yee, refused to comment on the lawsuit or on Rose’s pregnancy.

Edelman eventually acknowledged that he was the father of Rose’s child, making him liable for child support.

“The state of California, where the model currently resides, bases child support payments on income and parent’s rearing spending. And with Edelman three years into a $19 million four-year contact with the Patriots, Rose can expect a big payout,” the Daily Mail previously reported.

4. Rose Had a ‘Casual Relationship’ With Edelman & He Drew Comparisons to Tom Brady

According to TMZ, Rose and Edelman had a “casual relationship for about 2 years,” but they were never officially together. Other outlets have referred to Edelman and Rose’s relationship (or lack there of) as a “fling.”

Just days after Rose filed the paternity documents in court, Edelman was spotted on Nantucket with another model — Victoria’s Secret’s Adriana Lima. The two were spotted holding hands, instantly drawing comparisons to Patriots quarterback Tom Brady who had gotten actress Bridget Moynahan pregnant before the two ended their relationship and he started dating supermodel Gisele Bundchen.

While Brady went on to marry Bundchen, Edelman’s relationship with Lima was short-lived.

According to the website, Who’s Dated Who, Edelman is currently single.

5. Edelman Hasn’t Brought Lily to a Super Bowl — Yet

Edelman isn’t expected to play in Super Bowl LII, but he will definitely be on-hand to support his team as they take on the Philadelphia Eagles in Minnesota on February 4. Lily was too young to attend Super Bowl LI, but now that she’s a little older, it’s possible that she will go to the big game with her dad.

Each year, NFL players bring their families to the Super Bowl. Children of all ages have sat in boxes to watch their dads play, and some have even been lucky enough to be on the field with their dads after a win.

In 2010, for example, Saints quarterback Drew Brees held his young son on the field after winning Super Bowl 44. Baylen stole the show, looking around the field while in his dad’s arms.

Several Patriots players have also been known to have their children on-hand during big games — including Tom Brady, whose kids, Jack, Benjamin, and Vivian, were at Super Bowl LI. 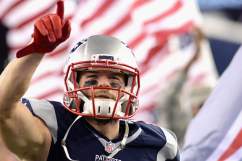 Julian Edelman Injury Update: Will He Play in the Super Bowl?