Back in December, New England Patriots wide receiver Julian Edelman chatted with ESPN’s Adam Schefter to discuss whether or not he’d be back in time for the playoffs. At the time, he didn’t give Schefter a definitive answer, but despite the bit of hope lingering in his response, he will not be playing in Super Bowl LII with his team.

The Patriots and the Detroit Lions were in the first quarter of a preseason game back in August when Julian Edelman went down. He left the game and was evaluated by team doctors before undergoing an MRI and confirming what most people had already suspected: he had torn the ACL (anterior cruciate ligament) in his right knee. Although this is a common injury, it is one that requires surgery and requires quite a bit of recovery time — anywhere from six to nine months.

Edelman underwent surgery to repair his ACL in late September and has been recovering ever since. If you’ve tuned into his Instagram Live in recent weeks, you’ve probably seen a couple of videos from his physical therapy sessions. You’ve probably also seen that he’s getting around pretty well these days — but could he be well enough to make a return to the Super Bowl?

A February return may have seemed possible, given the timeline, but Edelman is still on the team’s injured reserve.

“I don’t even want to get it out there. You really can’t put a timetable on these types of things,” Edelman told Schefter.  “A) People heal differently. B) You put a time out there, a day, and if you don’t get it past that day, then it’s like ‘Oh, well whose fault is it? Is it the athlete’s fault? Is it the training camp’s fault? Is it the doctor’s fault?’ C) You get it early, and you come back, but maybe you get hurt. Then it’s like ‘Oh, well maybe he shouldn’t have been going.’ I’m putting all my time and energy in trying to make this thing heal as fast as it possibly can, and as best as it possibly can,” Edelman added.

Edelman went on to say that he’s at the stadium everyday. Although he isn’t practicing with his team, he tries to keep up with what’s happening. And while Patriots fans would were hoping to see him make his return this postseason, the only game that is left is the biggest one of the year — the Super Bowl. Right now, Edelman is completely focused on the healing process and is being as patient as he can be.

“The main thing is you got to listen to your body because you push it, you beat it up. You got to get it acclimated to doing certain things, but then you know you got to have your rest and your recovery time. That’s a huge crucial part of it. And sometimes, I’m the type of guy that tries to float around that line a little too closely,” he told Schefter.

Edelman has been listed as “reserve/injured” on the Patriots roster for months. In the NFL, this means that a player can return to his team after being on IR for eight weeks. In 2017, the NFL changed their injured reserve rule to allow a team to bring back two players per season (previously, a team could only bring back one).

According to 247Sports, the Patriots still had one slot open heading into February 4, but that was not used to activate Edelman. The good news is that he should be back and better than ever for the 2018 season.

Edelman proved to be a clutch player in Super Bowl LI. He made an incredible catch that helped his team overcome a 21-3 deficit and beat the Atlanta Falcons 34-28.

You can relive that moment in the video below. 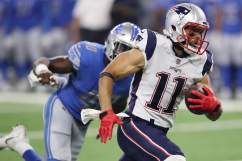