Getty He's already got one medal, but Max Parrot is hoping to bring home even more hardware from PyeongChang.

Max Parrot knew it would take some convincing.

The Canadian snowboarder always wanted to compete professionally, but Parrot’s family were wary of a future in the sport and what it would mean for the rest of his life. Still, Parrot refused to back down and that determination, or stubbornness, has served him well throughout his career.

Now, as he looks to get back on the podium at the PyeongChang Games, the two-time Olympian has the full support of his family. Here’s everything you need to know:

Played a little game with my parents today!! ? I am offering them a trip to Whistler with me!! Thank you mom and dad for everything!! ?? Check out my story for more!

Parrot grew up on the snow.

His father, Alain, was a former alpine ski racer and a Canadian water ski-jump champion who was more than happy to show his son the metaphorical ropes on the slopes. It didn’t quite work out that way, however, and Parrot could never truly find his footing on skis.

The Quebec native spent most of his childhood in the Bromont ski area, but knew, early on, that snowboarding was his true passion. He focused full-time on the sport at just ten years old and captured his first major victory at 16, taking third place at the St-Sauveur Shakedown.

The switch paid off in the end and, when he double medaled at the X-Games in 2014, it was Parrot’s father, Alain, who shed tears watching his son compete.

2. His Parents Were Nervous About His Interest in Snowboarding

Parrot may have been confident of his future in snowboarding, but his parents weren’t always as certain. In fact, when Parrot first started snowboarding, he bought his own board, mowing lawns for a year to save the $1,000 he needed.

It wasn’t until he was 15, however, that Parrot told his parents he was planning on skipping college and turning professional. They weren’t quite receptive to the news. The Canadian star told ESPN:

They were like, ‘Are you crazy? A pro snowboarder doesn’t make any money. There’s no way you’re going to stop school to become a snowboarder.’ I was like, ‘No, they make money!’

For the next two years Parrot did his best to prove his parents, and just about everyone in his life, wrong, competing as often as he could and racking up victories every time he got on his board. His parents, eventually, made him a deal – if he graduated high school, they would agree to support his career for a season. If, however, he couldn’t hit his stride as a pro, Parrot would go back to school and get a college degree.

Parrot didn’t go back to school. 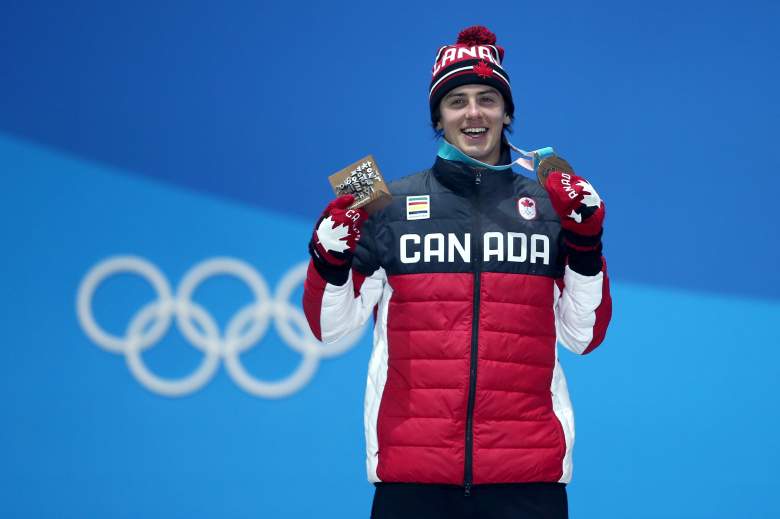 Parrot’s deal with his parents wasn’t just about his education – it was also about money. His mother and father agreed to support him, monetarily, for one season of competition, giving him nearly $20,000 over the course of the year so he could focus, solely, on snowboarding.

It was a sound investment.

Parrot’s career took off – quite literally. He drew the spotlight in a handful of competitions, earning invitations to premier events and, perhaps most importantly, was named to the Canadian national team. His parents told him to forget about paying them back, but Parrot refused and so, when he wasn’t standing on a podium or competing for a medal, he worked at a golf course during the summer and saved up his contest winnings.

He paid his parents back.

Good times home with @alyssonxo & the dogs!! Now off to South Korea for the @olympics!!? #olympics

Parrot keeps much of his personal life personal, but his girlfriend, Alysson Gendron-Gallant, is still a major part of his life and can frequently be spotted on the snowboarder’s social media feed.

The pair have been together for years and are pet-parents to their dog Loup – another big-time social media star. When Parrot isn’t competing, he and Gendron-Gallent still like to be outdoors and the couple are self-admitted adrenaline junkies.

Parrot told Team Canada that his guilty pleasure is “driving fast” and one, quick scroll through his Instagram feed would be enough to see he wasn’t lying. The Olympic medalist owns an Audi A4 and recently bought himself a Triumph Speed Triple, a 1000cc/140 horsepower sport bike. “This was my little personal gift from the season I had last winter” he told ESPN. “It’s so fun to ride!”

As if there weren’t enough, Parrot also told NBC Olympics he enjoys wakeboarding, mountain biking and, when he’s looking for something just a bit more relaxing, golfing.

5. Parrot’s Career Has Kept Him Away From Home

Parrot has spent the better part of the last decade competing and while he’s enjoyed every single moment, he also told Team Canada he considers “going home” a vacation. The two-time Olympian hasn’t been back home very often since turning pro, criss-crossing the globe and cementing himself as one of the best in the sport.

Over the course of his career, Parrot has also established himself as a bit of a lone wolf and his approach to training has set him apart from his fellow athletes. He told CBC:

We all have different ways of preparing ourselves. When you go out on the mountain, you take the chairlift, you do maybe in a day 15 jumps. But on a trampoline you can do 15 jumps in less than a minute.