Mikaela Shiffrin has already won a gold medal in the 2018 Winter Olympics, coming in first in the women’s giant slalom which took place on February 15.

Her parents, Jeff and Eileen Shiffrin, are her biggest supporters.

Jeff and Eileen were both avid skiers who competed in the sport as adults. They have dedicated their lives to their children, and Eileen quit her job as a nurse to travel with Mikaela, 22, coaching her every step of the way. Jeff is the breadwinner of the household and works as an anesthesiologist all over the country.

1. Her Mom, Eileen, Is Her Skiing Coach, But Doesn’t Get Paid

Got to meet and chat with @katiecouric for a while yesterday.. so that’s pretty cool!?‍♀️???? #DearKatieCouldIHaveYourBootsPlease #YouCantSeeHerBootsInThisPicButTheyreSuperCute

Eileen Shiffrin loved to ski. In fact, she joined her high school’s ski team in Williamstown, Massachusetts. When she went on to nursing school at the University of New Hampshire, however, she left the sport behind. She would pick it back up years later, when she met Mikaela’s dad.

Despite taking a few years off from hitting the slopes, Eileen’s experience and knowledge of the sport has been put to excellent use.

When Mikaela first started out, her mom was very much a part of her travels, but she wasn’t her daughter’s sole coach. Eileen accompanied Mikaela to various tournaments and made sure that she offered her daughter support. She would watch hours of skiing videos and give her daughter several tips, critiquing her runs and telling her where she could improve.

Eileen’s role in her daughter’s career became more prominent as Mikaela got older. These days, Eileen is Mikaela’s primary coach, but she doesn’t earn a salary from the gig.

“As it stands, she has been doing the job, all these years, on her own dime. The ski team doesn’t pay her a salary, and she covers most of her own travel expenses,” The New Yorker reported in November.

Sometimes, separating the mother/coach role is difficult for Mikaela, but it’s something that she’s working on.

“If she’s talking to me as my coach and I’m listening to her as her daughter, that’s one of the most heartbreaking, painful things. Those conversations can be terrible. Just because she might be hard on me on the slopes, which I ask her to be, because that’s the only way I can keep improving, doesn’t mean she doesn’t love me as a mom. I’m starting to really grasp that. And it’s awesome,” Mikaela told Time in early February.

“I have my own interests. I like to work out. I like to run. I want to take a nursing refresher course,” she told The New Yorker.

2. Her Dad, Jeff, Started Skiing When He Was Young & Competed in College

Jeff Shiffrin was raised in New Jersey. He embraced the cold winter months by taking up skiing. He would often head to Stratton or Sugarbush in southern Vermont to hit the slopes with his family when he was a kid.

“At 13 he joined the race team at what was then called Great Gorge Ski Resort (now Mountain Creek) in northwestern New Jersey, and on his first day of training he was greeted by an Austrian coach whose only instruction before pushing off the top of the hill was, ‘Follow me.’ It was a teaching tactic that Jeff would remember,” Sports Illustrated reports.

Jeff enrolled at Dartmouth College, where he fostered his love of skiing by joining the school’s ski team. When he wasn’t studying to become an anesthesiologist, he was trying to improve his time on the slopes.

3. Jeff & Eileen Taught Their Kids How to Ski, But Didn’t Pressure Them

This little boy, aka my big brother, graduates with his MBA today!! @taylorshiffrin you are killing it and even though I miss arguing over whether you or I would win in slalom, i'm so proud of you and you continue to lead the way and inspire me in so many ways. Congrats on starting this next exciting chapter!! ???? #graduate #MBA #youreabigboynow

When she was just 2 years old, Mikaela put on her first pair of skis.

“They had us walking around the living room in these tiny, little, plastic Mickey Mouse skis that you just latched onto snow boots,” Mikaela’s brother, Taylor, told The New York Post. For kids who grew up in Colorado, this seems completely natural.

Mikaela’s parents started her off slowly, letting her move around their driveway until she got used to being in skis. The Shiffrin family would ski as a group, just for fun, and Jeff and Eileen never pressured their kids beyond that. It just so happens that both Mikaela and her brother were good skiers.

“It was always ‘Follow me’ or ‘Follow Mom.’ They didn’t get a chance to make too many turns without somebody who had an awful lot of interest in their safety and progress teaching them how to do it right,” Jeff told Sports Illustrated. As the kids showed more interest in the sport, Jeff and Eileen enrolled them in lessons.

At the age of 5, Mikaela was considered “advanced,” so much so that ski instructors didn’t know what age group to put her in. She and her brother continued skiing and their parents eventually enrolled them both in Burke Mountain Academy in Vermont. From there, Mikaela’s skiing career took off.

4. Jeff & Eileen Met While Working in Boston & Have Lived All Over the Country

~4th of July~ Smile at a stranger today. Say thank you. Say please. Tell someone you love them. Salute a veteran, or active service member. Because how lucky are we, to have this? How lucky are we to have love and life and justice and liberty and the pursuit of our dreams and happiness? No, it isn't always perfect, but how lucky are we to have a home worth fighting for? How lucky are we to have people who are willing to fight for all of those values. To stand up for this country. Thank them! Thank the men and women who risk their lives to keep the biggest fights away from our home. So we can have days like this, where our biggest worry is how we are going to properly celebrate the "birth" of our country. Thank you to all the service men and women who keep our country safe. Happy 4th of July! #independenceday #4thofjuly #thankyou #family

Jeff and Eileen Shiffrin met in Massachusetts in 1985. At the time, they had both been working at St. Elizabeth Hospital Medical Center in the city of Boston. Eileen was working as a nurse in the hospital’s intensive care unit and Jeff was an anesthesiologist. The two ended up talking and they bonded over their love for skiing. According to Sports Illustrated, they went on a ski-date to Killington Mountain in Vermont.

Little did they know that their blossoming love would create an Olympic gold medalist.

Jeff and Eileen got married in 1986, and continued skiing together in Colorado, where they built their home. They welcomed their first child, son Taylor, in 1992, and three years later, welcomed their daughter, Mikaela. They chose the name because it sounded Slavic. According to Sports Illustrated, it was a way for them to honor Jeff’s grandparents, who lived in Belarus.

In 2003, Jeff got a job offer in New Hampshire, and the family relocated to New England from their home state of Colorado. In 2008, he took another job that landed the family back in Colorado. Shiffrin wanted to be back in Vermont, however, so Eileen got a condo and brought her daughter back to Vermont so that she could attend Burke Mountain Academy.

“Shiffrin was born in Colorado, moved to New Hampshire and trained in Vermont before moving back in middle school to what may be the best place on the planet for a skier. And the person who today may be the best skier on the planet didn’t want to be there. Her parents knew she needed to get back to the Northeast. She enrolled at the Burke Mountain Academy, a boarding school in Vermont for ski racers, where the snow was so bad that it was basically ice. But what’s miserable for most skiers was magical for Shiffrin. This is where she became the most dominant skier alive,” a post from Burke Mountain Academy reads.

The Shiffrins also have an apartment in Austria where they can stay when Mikaela is competing overseas.

Although the media attention that Mikaela Shiffrin faces is pretty extraordinary (and it will only increase in the future), she has been able to live a relatively private life outside of the Olympic Games. In fact, not too many people knew that she was dating French skier, Mathieu Fairve.

In an interview with The New Yorker, Eileen sort of spilled the relationship beans.

“I’m sure you’ve heard, she has a boyfriend in France,” Eileen told the outlet. Journalist Nick Paumgarten then sent Mikaela a text about her mom’s comments.

Mikaela Shiffrin and Faivre have been doing the long distance relationship thing for several months, but they do their best to make time to see each other. Not only has Mikaela gone to France, but Mathieu has traveled to Colorado as well. According to The New Yorker, he stays in a hotel when he visits, as Mikaela still lives with her parents.

No word on how Mikaela’s dad feels about her romance. 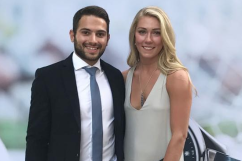