Snowboard Big Air is a new Olympic event. It revolves around one trick, as opposed to halfpipe, for example, which includes several tricks.

The one trick in the Big Air event has to be big and filled with as many twists and turns that an athlete can manage to do while still managing to stick the landing. The event is judged four criteria: Difficulty, execution, amplitude, and landing.

This year marks the very first time that Big Air has been a part of the Olympic Games.

Snowboard Big Air is making its Olympic debut at the 2018 Winter Games in PyeongChang. The event joins the slate of winter sports disciplines 20 years after snowboarding first arrived at the Olympic Winter Games in 1998 in Nagano, Japan.

Big Air is not exclusive to snowboarding, though it is the only Olympic big air event; skateboarding, skiing, BMX and motocross all have variations of the competition. Big Air events in any sport typically involve a competitor riding down a hill and launching off a ramp to perform a trick. It gives competitors a single chance to land the most complex trick they can. Each competitor’s run is judged and awarded points, the winner being the entrant with the highest-scoring run.

While Big Air, is new to the Winter Games, the governing body for ski and snowboard disciplines has recognized it for more than 15 years. The International Ski Federation added Big Air to its World Cup calendar during the 2001-2002. The following season, it held eight Big Air events throughout the world and included Big Air in the FIS Snowboard World Championships, alongside Parallel Giant Slalom, Parallel Slalom, Halfpipe, Snowboard Cross.

According to the official site for the 2018 Games, each rider’s run is judged by six international officials on a variety of criteria: amplitude, execution, difficulty, and progression and landing, often referred to as the “D-E-A-L” criteria.

Difficulty may seem self-explanatory, but there is some nuance in play. This criterion is all about how technical a given trick is to land. The number of rotations is one factor, but not the only. Riders can make a trick more difficult by riding switch (snowboarders naturally ride one of two ways, with a dominant right foot at the front of the board (orthodox) or a dominant left foot forward (goofy); riding switch is to ride in the opposite of their natural stance). Landing tricks other riders aren’t doing is another way competitors can set themselves apart.

Execution speaks to form and control throughout the entirety of a rider’s trick. Riders must go for perfection.

Amplitude, much like in wavelength, is about height. The higher a rider travels off the kicker, or more air he or she catches, the greater the amplitude.

The progression and landing criteria are about finishing the trick before hitting the sweet spot. Riders must land clean and in control. Falls will count against riders and can cost up to 30 percent of the run’s points.

After all six judges submit their individual scores, the highest and lowest scores are dropped. The remaining four scores are averaged for the run’s final score.

3. There Are 2 Rounds in Big Air, Qualifying & the Finals

Snowboard Big Air is split into two rounds — qualifying and the finals.

According to the 2018 Games’ official site, riders get two runs during the qualifying round, which will consist of one or two heats. Riders’ best scores are used to determine who advances. The top 12 qualifiers move on to the final, with the lowest score going first and the highest score going last throughout the finals.

In the event that qualifying is broken up into two heats, the top six riders from each heat will advance. Qualifying scores are used to determine who makes the finals and do not carry over.

Scoring in the final is a little different. Each rider gets three runs; the lowest score is dropped and the two highest scores are combined to get the total.

But it gets a little more complicated; according to NBC, snowboarders must spin their tricks in opposite directions during these two runs. If a rider performs a frontside rotation in his or her first run, one of the remaining runs will have to be spun backside. That rider would also have the option to go switch frontside (or switch backside) as well.

Snowboarding has become increasingly more popular over the years, which is one reason that different snowboarding events have been added to the Winter Games over the years. The addition of Big Air in 2018, however, has left some people unhappy.

The New York Times describes big air as “the most beautiful, insane, stupid, dangerous, death-wishing, insane, and beautiful sport ever perpetrated on innocent spectators.” As if the word “dangerous” wasn’t emphasized enough, the Times goes on to say that “death is always near.”

But for some, “dangerous” is not the epitome of sport. Take The Week’s Jeva Lange and her story entitled “How the Winter Olympics Became the X Games.”

“…the macabre truth is that it’s fun to watch athletes cheat death. After all, people didn’t flock to watch Evel Knievel jump over foam pits; the thrill is in imagining what could happen with a wrong move and a ring of fire. At some point along the way, the Olympic governing body realized this. And at some point, the Winter Games began to change. The question remains, though: At what point does upping the ante simply become stupidity?” she asks.

Airing in primetime, viewership of Big Air will tell whether or not the event is an overall crowd pleaser.

5. Athletes to Watch in the 2018 Big Air Competition Include Mark McMorris From Canada & Anna Gasser From Austria

Mark McMorris is favored to make it to the podium in the men’s Big Air competition in PyeongChang. According to the New York Times, McMorris has a trick up his sleeve that could earn him a gold medal — if he can pull it off.

“There’s a trick that even someone new to the sport can probably guess is a doozy: the backside triple cork 1440. He does four full rotations (1440) and basically turns upside down three times (triple).”

You can see McMorris’ triple cork in the 2012 X Games in the video below.

Additionally, you’ll want to keep an eye on Canada’s Max Parrot and on Team USA’s Red Gerard, the latter of whom won gold in the snowboard slopestyle event last week.

As far as the women go, Austria’s Anna Gasser is expected to make it to the podium.

“The crazy part about what I’m doing is I get injured so much and still — every time I’m laying down there, all I want is to get back on my feet, which I think a lot of people think is crazy,” she said during a press conference in PyeongChang. 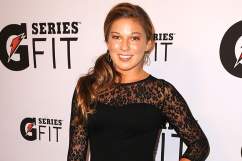