Snowboard Cross, which is commonly known as Boardercross, became an Olympic sport in 2006.

1. What Is Snowboard Cross?

Snowboard cross is a timed snowboarding event that involves waves of competitors simultaneously racing down a course filled with various snowboarding elements, including turns, drops, jumps, berms, and other items. The objective is to finish the course first. The elements are in place to test a boarder’s ability to maneuver through changing terrain while riding as quickly as possible.

Snowboard cross has been an official Olympic event since the 2006 Winter Games in Torino. Other events debuting in Torino include mass start biathlon, team sprint cross country skiing and team pursuit speedskating.

2. How Is Snowboard Cross Judged & What Are the Rules?

Snowboard Cross is based on an athlete’s time, which means there aren’t judges giving athletes points, which is what happens in many other snowboarding disciplines, including halfpipe.

But whilst there aren’t points awarded, there are judges in place to enforce the sport’s rules. For example, any “intentional contact by pushing, pulling or any other method that causes another competitor to slow down, fall or exit the course is grounds for an automatic disqualification. Unavoidable casual contact may be deemed acceptable. All contact infractions are at the discretion of the course judges and race jury,” according to NBC.

Athletes are also not allowed to intentionally block an opponent who is trying to move past them. Athletes who feel as though they’ve been interfered with are allowed to ask the judges to review footage, but that request “must be made before the next heat starts.”

3. Snowboard Cross Is Referred to by Multiple Names

Outside of the Olympic Winter Games or other events governed by the International Ski Federation, snowboard cross is also referred to as boardercross. The sport’s origins actually lie in extreme sports television in the early 1990s.

“In 1991 Steven Rechtschaffner and Greg Stump created an eight-episode television series about extreme sports. Stump hosted the series, which was called Greg Stump’s World of Extremes. The pair needed a daredevil sport to film for the final episode.

Rechtschaffner had an idea. In a popular sport called motocross, motorcyclists raced on a dirt course with sttep bumps and sharp turns. Why not combine motocross with snowboarding? This would create a challenging trail for snowboarders to race down. The first racer over the line would win. The new event would be called boardercross,” reads a passage from Snowboard Cross, by Darice Bailer.

The show was successful and boardercross was a hit. Rechtschaffner trademarked “boardercross” to protect the sport and prevent anyone from using the name in conjunction with similar snowboarding events without his permission. ESPN’s called the event Snowboarder X for 1997’s first televised Winter X Games (Snowboarder X was not among the listed disciplines for the upcoming 2018 Winter X Games).

The International Skiing Federation, the governing body for the Olympics and World Cup, calls the event Snowboard Cross.

4. There Are Differences Between Men & Women’s Snowboard Cross in PyeongChang

Both seeding and qualifications are comprised of individual runs in which each athlete’s time is recorded. For the men, all 40 competing athletes advance to the next portion. In the women’s event, however, only the top 24 out of 30 athletes will continue on, according to NBC.

The seeding/qualification rounds are followed by the elimination rounds.

The remaining athletes compete in heats, each wearing a bib color that represents their seeding/qualification ranking.

“The top-ranked rider in the heat wears a red bib, No. 2 a green bib, No. 3 a blue bib, No. 4 a yellow bib, No. 5 a white bib and No. 6 a black bib. Based on their bib colors, riders choose which of the six starting gates they will use in the heat (the rider with the red bib gets first pick, followed by the rider in the green bib, and so on).”

According to NBC, the men’s elimination begins with an opening ride which consists of eight heats of five athletes. The top three advance to the quarterfinals. The athletes who finish in fourth and fifth place are ranked according to their finish time and their seeding results.

The women move straight from the qualifying round to the quarterfinals.

“The racers ranked fourth through sixth in the semifinals (six athletes total) are relegated to the small final to determine seventh through 12th place.”

If two (or more) athletes appear to cross the finish line at the same time, an Olympic official will review footage to determine the outcome.

5. Who Is Competing & Who Is the Favorite to Medal?

Amongst the 40 athletes competing in the men’s run are Team USA’s, Hagen Kearney, Jonathan Cheever, Mick Dierdorff, and Nick Baumgartner.

A favorite? popular American snowboarder Lindsay Jacobellis. She will return to the slopes in the search for gold. The 32-year-old won silver at the event’s debut during the 2006 Winter Games in Turin but failed to progress to the medal round in 2010’s games in Vancouver. While contending for the lead with Canada’s Maelle Ricker, Jacobellis’ board made contact with a gate marker and she was disqualified, finishing fifth overall.

A crash during her semifinal run at the 2014 Sochi games led to another disappointing finish, this time seventh overall. Jacobellis is being given 5-1 odds to win by several sportsbooks, according to Oddschecker. If the event plays out how the odds makers are calling it, she should finish in medal contention. 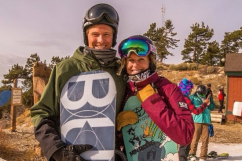