Bobsledder Steve Holcomb died on May 6, 2017. He was found dead in his bed at the U.S. Olympic Training Center in Lake Placid, New York, where he had been preparing for the 2018 Winter Games with his team. According to the coroner, a toxicology report showed that he had alcohol and pills in his system at the time of his death, and he likely died from pulmonary congestion. He was just 37 years old.

His mom, Jean Schaefer, is in PyeongChang, South Korea, for the Olympics, honoring her son’s legacy and raising awareness for a condition that he suffered with before his death.

Years before Holcomb passed away, he was diagnosed with Keratoconus, an eye condition that causes a bulge in the cornea and impacts a person’s vision.

“The cornea is the clear window of the eye and is responsible for refracting most of the light coming into the eye. Therefore, abnormalities of the cornea severely affect the way we see the world making simple tasks, like driving, watching TV or reading a book difficult. In its earliest stages, Keratoconus causes slight blurring and distortion of vision and increased sensitivity to light. These symptoms usually first appear in the late teens and early twenties. Keratoconus may progress for 10-20 years and then slow or stabilize. Each eye may be affected differently,” according to the National Keratoconus Foundation. The condition is most commonly found in young adults, and the cause is unknown.

Holcomb’s diagnosis almost ended his career as a professional bobsledder. In 2000, Holcomb underwent Lasik eye surgery, but it didn’t do anything to help his condition. He tried several other things to try to help himself see better, including hard contacts, but things kept getting worse.

Holcomb tried to cope with his failing eyesight and was determined to stay focused on bobsledding, even competing in the 2006 Olympic Games in Turin (his team finished in sixth place). But his condition worsened.

“It’s not easy to sympathize with. People have bad eyes, and they wear contacts or glasses, but when you have this disease, your eyes are terrible and you are literally just going blind every single day. At that point, I wouldn’t have gotten into the sled with myself,” he told Today back in 2014.

“It’s one thing to be born blind, but when you start out 20/20 for most of your life and all of a sudden in the course of five or six years your whole life becomes about the space right around you, it’s pretty scary and depressing. I was never going to see another sunset. I could never see a beautiful woman again. You’re to the point where you almost give up.”

Holcomb’s eyesight got so bad that he did reach the point of wanting to give up. In 2007, tried to kill himself. In 2014, he told Today that he had suffered from depression and that he swallowed “73 sleeping pills” and a few swigs of whiskey one night in an attempt to end his life. Holcomb woke up the next day, living to fight on.

In 2008, Holcomb met Dr. Brian Boxer Wachler, and his life changed for the better. Wachler told Holcomb that he had something that would help his condition. Although skeptical at first, Holcomb figured that he had nothing to lose. The procedure not only worked for Holcomb (his vision went from 20/1,000 to 20/20), but it has since been named after him.

“The Holcomb C3-R Cross Linking System is a non-invasive procedure in which a solution containing riboflavin is used to strengthen the cornea and reduce the cone-like shape caused by Keratoconus. Patients sit under an ultraviolet light for 30 minutes to activate the solution. Boxer Wachler typically combines this with another procedure called INTACS, which involves implanting tiny plastic segments into the eye to flatten out the cornea.”

The video below shows Holcomb’s vision before and after undergoing the Holcomb C3-R Cross Linking System.

Two years after finding a treatment that worked for him, Holcomb and the U.S. bobsledding team won a gold medal in the 2010 Olympic Games in Vancouver. In 2014, he won a bronze medal with Steve Langton in the two-man bobsledding competition.

“I attempted suicide, and when I woke up, it was a moment in my life that I realized that I had a bigger purpose. It’s been a tough journey, but it’s been amazing,” Holcomb told Today.

Holcomb went on to become an advocate for those suffering from Keratoconus and would often talk about the minimally invasive treatment that helped change his life.

He teamed up with Dr. Boxer Wachler on a foundation called Giving Vision, a non-profit that provides grants to patients who can’t afford to undergo treatment for Keratoconus. Since Holcomb’s death, the foundation has been renamed. It is now known as Giving Vision: Steve Holcomb Legacy Foundation. Holcomb’s mom is on the board of directors.

She and Dr. Boxer Wachler are both in South Korea this week in honor of Holcomb. 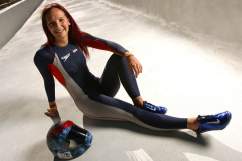