Getty In this photo, Pink attends the 2017 MTV Video Music Awards at The Forum on August 27, 2017 in Inglewood, California.

Prior to tonight’s Super Bowl, there are two performances ahead of the game. One performer will execute “The Star-Spangled Banner,” and another will sing “America the Beautiful.” Broadway’s “Hamilton” performer Leslie Odom Jr. is set to perform “America the Beautiful”, with the help of a choir from St. Paul. As for the national anthem, singer Pink was brought on board to carry out the performance.

Unfortunately, Pink has contracted the flu and has been trying to overcome it for her big performance. Over the weekend the Los Angeles Times reported that she struggled with a pre-Super Bowl performance gig. Jon Bream, of the Minneapolis Star-Tribune, reported that, “Early during Friday’s performance, the pop star, a mother of two, explained that she got a cold from her kindergartner. Throughout the concert, the singer guzzled water, chewed gum and carried on, OK, she let her two backup singers carry passages on a few songs.”

Pink has been rehearsing for her national anthem performance, but she has been having a difficult time, as she explained to her Instagram followers in a post that read, “Trying to practice the flu away. I’ve been waiting to sing this song since 1991 when I saw my idol, Whitney Houston, own this song. And now, my chance has finally come. And it just so happens that this chance comes when I have two small Petri dish kids who literally cough INTO MY MOUTH and rub their snot on my cheek. You can’t write this stuff I swear!”

Pink continued, “Here we are. I’ve arrived at another one of my dreams which is slowly becoming a sort of nightmare. I will tell you, this is one of the biggest honors of my life, singing this song in front of my family, my military family, my dad and brother and step mama and family and the world. And the EAGLES!?!?! I promise I will do my best, as I always do.”

The Super Bowl kick-off starts at 6:30 p.m. ET/3:30 p.m. PT and it will air on the NBC network. But, the Super Bowl coverage will begin at 6 p.m. ET, so be sure to tune in for the pre-game performances. Hopefully, Pink will be able to pull through and execute a strong performance of the national anthem. There has been no word of a replacement or lip syncing, so perhaps Pink is just going to soldier through her performance. 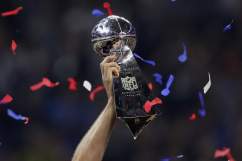