The 2018 ACC Tournament kicks off Tuesday, March 6 in Brooklyn at the Barclays Center with a champion being crowned on Sunday, March 10. Duke enters the tournament as a slight favorite (+200) edging out Virginia (+250) in the odds. Miami (+1000) and Clemson (+1200) are next in line in the Vegas odds as favorites to cut down the nets in New York.

The Blue Devils are led by sharpshooter Grayson Allen and a bevy of talented freshman players including Marvin Bagley. Coach Mike Krzyzewski believes his teams is ready for March.

“If you take out the first three conference games, we’ve played as well as anybody on the defensive end in the conference,” Krzyzewski told the News and Observer. “Even with those three games, we’re right there. Not one, Virginia would always be one, but we’re two or three in everything. The kids have worked hard on that.”

Duke may be getting the attention, but Virginia has been the more consistent team. Virginia has only lost two games all season. The Cavaliers only lost one game inside the conference, and it was a one point overtime loss to Virginia Tech. Virginia has won 20 of their last 21 games.

Not only does Virginia enter the ACC as the No. 1 seed, the Cavaliers are ranked No. 1 in the country in the latest AP Poll. Virginia coach Tony Bennett spoke to ESPN about how his team is preparing for the upcoming tournaments.

“Now you are in one-and-done tournament play — the ACC tournament and the NCAA tournament,” Bennett told ESPN. “You continue on, but you understand that it is quality play. You do not change who you are, but you know that if you drop one, you are out.”

Miami is another team to watch thanks to a talented backcourt. Bruce Brown Jr. is having a down shooting year, but can still get buckets. After a slow start, freshman Lonnie Walker has started to find his footing, and could be one of the breakout players in March.

Here’s a look at the 2018 ACC tournament schedule courtesy of the ACC.

Here’s a rundown of the opening ACC tournament championship odds courtesy of OddsShark.com. 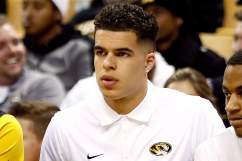 Read More
ACC, Basketball, College Basketball
As the ACC heads to Brooklyn find out the full schedule, and who is favored to cut down the nets. Check out the ACC bracket and tournament odds.