Getty Grayson Allen is an intriguing NBA prospect thanks to his shooting.

Grayson Allen is one of the most polarizing players in college basketball, and this is likely to carry over to the NBA draft process as his skill set is widely debated.

Allen is outside of the first round in Heavy’s latest mock draft, and slipped in at No. 30 in our previous mock. Sports Illustrated’s Patrick Woo has Allen as his 33rd ranked prospect.

Allen has come back on nicely toward the end of the season, and remains a fairly safe option in this range to provide toughness, shooting and secondary ball-handling. He’s a good athlete and has proven over time he can make difficult shots off the dribble and catch. His offensive role was somewhat reduced this season, but he’s done a solid job spelling Trevon Duval at point guard when necessary. He’s strong and can attack off closeouts to keep defenders honest. His athletic ability doesn’t totally translate defensively, but it’s a fair bet that his experience and competitiveness can help split the difference.

ESPN’s Mike Schmitz calls Allen a “fringe” first round pick, meaning his current draft range is late first round to early second round. ESPN has Allen going in the second round at No. 33 in their latest mock draft.

Here’s a look at my draft profile with Allen’s strength, weaknesses and an overview of his NBA draft stock.

Strengths: When Allen’s shot is falling, he is one of the best three point shooters in the country. Allen utilizes his shooting threat to his advantage with a nice pump fake that allows him to get closer shots. He is also fairly athletic and capable of using his athleticism to get to the rim where he can either score or kick it out to an open teammate. Allen scores off the bounce more than some may expect.

Allen is far from being a lock-down defender, but his defensive plus/minus saw an uptick this season at 2.2 compared to just .5 a season ago. Overall, Allen performs well in plus/minus coming in at 9.4. Allen could eventually translate into a three-and-D prospect at the next level, but he will have to become a much better defender to stay on the floor.

Weaknesses: Allen is often compared to Duke great J.J. Redick, but Redick was a much better shooter and overall scorer for the Blue Devils. During his senior season, Redick shot over 42 percent from long range while averaging 26.8 points per game. Allen was only able to shoot it over 40 percent during one of his four college seasons. Most recently, Allen shot 37.5 percent from the three-point line. Allen is a better athlete than Redick was coming out of college. Allen averaged 15.6 points, 4.7 assists and 3.3 rebounds this season at Duke.

The biggest knock on Allen is he is a streaky shooter. This was on great display in Duke’s Sweet 16 matchup against Syracuse where Allen was just 3-of-14 from the three point line. Allen can get red hot as he showed against Michigan State hitting seven of 11 threes. The challenge is Duke does not always know what it is going to get from Allen on a nightly basis.

Much has been made about Allen’s on-court antics, tripping opponents and going past the line at times. This is unlikely to have a big impact on his draft stock either way, but it definitely falls in the the negative column when evaluating him for the NBA.

Summary: Allen’s offensive ability makes him an intriguing prospect, but his inconsistency as a shooter is scary. Allen can plug in as a rotational player coming off the bench to provide instant offense. The challenge is Allen will be competing with other college basketball upperclassman like Jalen Brunson and Devontae’ Graham for a spot at the end of the first round. Allen could wind up slipping into the early second round where an NBA team will be happy to gain his shooting prowess. 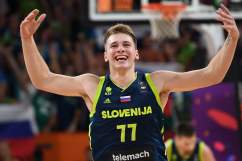