Getty Rick Brunson is anxious to see his son succeed in this year's NCAA Tournament.

Rick Brunson grew up around basketball – and he made sure his son did too.

The former NBA journeyman spent nearly a decade in the league, criss-crossing the country and suiting up for a handful of teams, but, despite the challenges, Brunson did his best to instill that same love of basketball in his son. Now, with Jalen and his Villanova teammates setting their sights on another national championship run, the Brunson family will be back where its most comfortable, sitting sidelines and watching hoops. 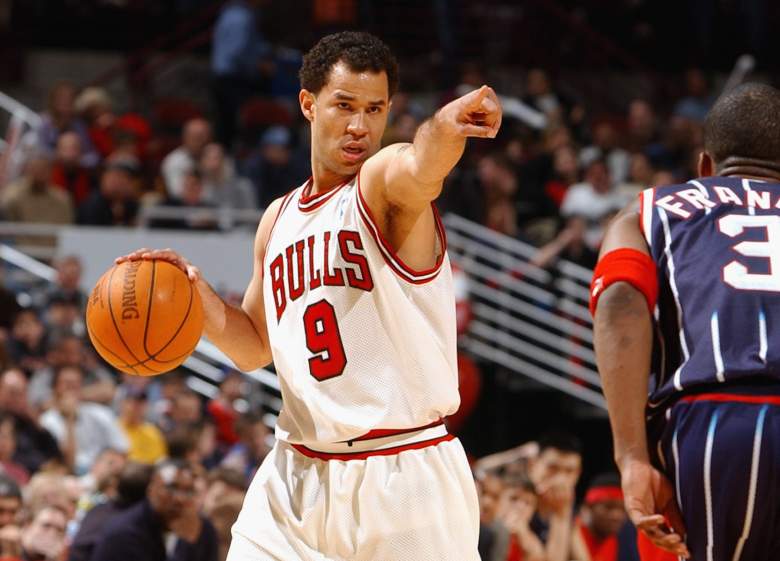 ‌Despite a strong career at Temple, Brunson wasn’t drafted when he graduated in 1995 and spent a season playing for the Adelaide 36ers where he was named season MVP. That performance was more than enough to grab the attention of NBA scouts and he was signed by the Portland Trail Blazers in 1997-98.

Brunson was a journeyman in the truest sense of the word. After Portland, he signed with the Knicks in 1999 and was a member of the 1999 Eastern Conference championship team, before joining the Boston Celtics in 200-01, resigning with the Knicks that season and, in 2001-02, returning to Portland. Brunson split time with Chicago and Toronto in 2003-04 and played for the Los Angeles Clippers in 2004-05.

In the end, Brunson said he lost track of the number of teams he played for, spending nine years in the league, all on one-year contracts. He left the game in 2006 and turned his attention on his son’s performance, determined to make sure Jalen knew exactly where Brunson had gone wrong.

2. He Worked as an Assistant Coach at the NBA & College Level

Brunson couldn’t ever quite walk away from the game.

After hanging up his sneakers in 2006, Brunson joined the Denver Nuggets in April 2007 as an assistant coach, focusing on player development. He also served as the director of basketball operations at the University of Virginia from 2007 to 2009 and, in May 2009, was hired as an assistant coach for the Hartford men’s basketball team.

On September 9 2010, Brunson joined the Chicago Bulls staff as an assistant coach and, during the 2012-113 season, worked in the same capacity for the Charlotte Bobcats.

Most recently, Brunson worked as an assistant coach for the Minnesota Timberwolves.

3. Brunson & His Wife, Sandra, Met While They Were Student-Athletes at Temple

Brunson was in the midst of a dominant career at Temple when he met his future wife, Sandra, and, of course, sports were at the core of their relationship. Sandra was a volleyball star for the Owls when she and Brunson crossed paths and both of them were immediately impressed by the other’s prowess on the court.

After all, Brunson, who played his high school ball at Salem High, was the only McDonald’s All-American from the state of Massachusetts at the time. And he didn’t miss a step when he moved to the college game. Brunson played 124 games for Temple, averaging 12 points per game with 3.8 assists and two steals. That winning mentality – from both his parents – heavily influenced Jalen throughout his high school and college career. Brunson told SB Nation in 2015:

We talk about winning. He’s closing in on 100 wins in high school. He’s only lost 19 times. Winning brings greatness. And to go to Villanova and add to what they already have will be phenomenal for him. And to compete for a national championship will be great.

Jalen still has his eyes on that national championship, a focus that hasn’t changed at all in the last three years. “My family is a bunch of hardworking people,” he told SB Nation. “It’s just hardworking in everything: athletics, the classroom, the work, everything. If you are going to put your mind to something you have to do it. We live that.”

The Brunsons welcomed their first son, Jalen, in 1996 and their daughter, Erica, in 2001. And it didn’t take long for the family to realize that basketball was a hereditary talent.

The family lived in Cherry Hill, New Jersey for much of Brunson’s NBA career before moving to Lincolnshire, Illinois in 2010 and it was there that Jalen hit his stride on the hardwood. He attended Adlai E. Stevenson High School where he led his team to a third-place finish in the 2013-14 state tournament and racked up the accolades.

In 2014 alone, Jalen was named Gatorade Illinois High School Boys Basketball Player of the Year, Associated Press First All-State first team and Sun Times Player of the Year – just to name a few. He was also a member of the 2014 USA U18 National Team that compiled a 5-0 record and captured gold in the FIBA tournament that year.

Jalen was even better as a senior. He led Stevenson to its first boys basketball state championship in 2015 and was named Mr. Basketball of Illinois that March.

Brunson drew headlines once again in June 2014 when he was arrested on charges of attempted criminal sexual assault, criminal sexual abuse, aggravated battery and domestic battery following an encounter with a massage therapist at a fitness center in Vernon Hills, Illinois.

The former NBA star pled not guilty after authorities said Brunson used the name of another retired player – Patrick Ewing – to book an appointment with a massage therapist who had previously told him she’d no longer work with him.

Brunson testified that his encounter with the massage therapist was a consensual act and part of an ongoing extramarital relationship. His attorneys also claimed the woman was in financial trouble and asked Brunson for money just two weeks prior to the alleged incidence. Brunson was acquitted of all charges.

“It is the state’s burden to prove guilt beyond a reasonable doubt, and considering all the physical evidence and testimony, I must conclude that the state did not prove that guilt convincingly,” Judge James Booras said.