Getty Defensive end Michael Bennett of the Seattle Seahawks runs for a touchdown after recovering a fumble against the New Orleans Saints in the first quarter during a game at CenturyLink Field on December 2, 2013 in Seattle, Washington.

Although the Seahawks have made the Super Bowl as recently as 2015, it feels like a long time ago for fans and it’s possible the window has now shut with the growing age of the once vaunted Legion of Boom.

The Seattle Seahawks built a reputation over the years with their fearsome defense featuring the likes of Richard Sherman, Earl Thomas and Kam Chancellor in the secondary. This group came to be known as the Legion of Boom and the most dangerous group of defensive backs in the league.

Although the secondary made the headlines, the defensive line was also quite good. In 2017 the line featured the fearsome two-some of Michael Bennett and Sheldon Richardson. Despite all the talent on the defense, the Seahawks failed to make the playoffs in 2017 and now we might be seeing the end of the line for the defense as it is.

Coupled with rising salaries, age, injuries and a variety of other factors, Seattle appears to be in the process of retooling the defense in an effort to get younger and remain competitive as quarterback Russell Wilson continues to mature and get better.

Today, the Seattle Seahawks have traded DE Michael Bennett and a seventh-round draft pick to the Super Bowl champion Philadelphia Eagles in exchange for a fifth-round pick and WR Marcus Johnson.

The moves weren’t done with Bennett either. We have learned that CB Richard Sherman will be released. Teammates have begun offering their farewells to the cornerback but according to ESPN, Sherman hasn’t heard anything about a trade or release so far.

#Seahawks CB Richard Sherman just text me, "I'm good. Not sure what that's about…Haven't been told anything," in reference to Jeremy Lane's tweet.

As it turns out, his teammates were a few days too early as Sherman has indeed been released.

It wasn’t that long ago that Richard Sherman was arguably the NFL’s top corner, compared to the likes of Darrell Revis and Patrick Peterson. As we all know, father time is undefeated and both Sherman and Revis have slowed down over the years. Richard Sherman finished the 2017 season on the injured reserve list with an Achilles injury.

For right now, we can take a look at the Seahawks defensive roster as it is and where they stand going forward. The current iteration below will still include Sheldon Richardson on the roster, despite the possibility he may also be on the move.

Here’s a look at the updated depth chart on defense after the trade of DE Michael Bennett. This depth chart represents the final depth chart of the 2017 season and will include free agents since the new league year has not officially started yet.

Kam Chancellor is missing from the depth chart because of injury but he’d presumably come back at  SS once he regains his health. As of right now, it’s still not known if Chancellor will decide to retire or not.

One certainty is this will definitely not the be the Seahawks defense fans have become accustomed to seeing recently once the 2018 season begins. 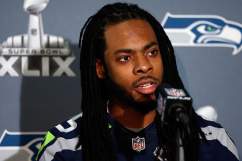