Getty Jordan Spieth during the final round of the 2018 Masters.

Spieth shot a 64, missing a par putt on the 18th hole that would have set the course record for a final round of play, but fell two strokes short of Reed.

Spieth’s comeback would not have been biggest in any major. Paul Lawrie stormed back from a 10-stroke deficit at the 1999 Open Championship to defeat Jean van de Velde and Justin Leonard.

Here are the largest comebacks in Masters history:

Jack Burke was eight strokes behind amateur Ken Venturi entering the final round of the 1956 Masters, according to Augusta.com. Venturi shot an 80 that day, while Burke’s 71 was only one of two scores under par on the day.

Gary Player trailed Hubert Green by seven shots entering the final round of the 1978 Masters. He made seven birdies over the final 10 holes to claim a one-shot victory.

“One of the things I am is an eternal optimist,” Player told the Augusta Chronicle. “I was playing excellent golf, and I hadn’t made any putts. But you have to keep on aiming at them.”

In 1996, Nick Faldo stormed back from 6 strokes behind to overtake Greg Norman. The spotlight in that Masters tournament was more on Norman, whose performance is seen by many as one of the biggest chokes in sports history.

“We’ve had an amazing day today,” Faldo told The Washington Post. “I honestly and genuinely feel sorry for Greg and what he’s going through. . . . I just felt for him. I said {to Norman}, I don’t know what to say. I just want to give you a hug,’ that’s all.”

Art Wall completed a six-stroke comeback in 1959, beating Cary Middlecoff by one shot, according to The Morning Call.

Fuzzy Zoeller was a rookie in 1979 when he completed a six-stroke comeback to beat Ed Sneed and Tom Watson in a sudden-death playoff, the first in Masters history, according to ESPN.

Charl Schwwartzel was four strokes down entering the final round of the 2011 Masters. He won by two strokes over Adam Scott and Jason Day.

“There’s so many roars that go on around Augusta,” Schwartzel told ESPN. “Especially the back nine. It echoes through those trees. There’s always a roar. Every single hole you walk down, someone has done something. And I’d be lying if I said I wasn’t looking at the leaderboard.”

Jimmy Demaret was four strokes behind Jim Ferrier entering the final round of the 1950 Masters, according to the Augusta Chronicle. He posted a final round 69 to top Ferrier and win his third Augusta title.

“Demaret, whose colorful garb made him look like an Easter egg rolling along the greensward, backed in to the victory that made him the first man in history to win the Masters three times,” the Chronicle wrote at the time. 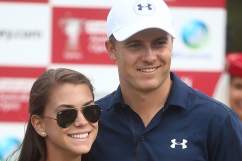