Getty Tiger Woods is favored to win the Masters

Masters week is upon us, and Tiger Woods is trending in the right direction. Despite not playing in the last two tournaments, Woods has moved up in the odds to become a co-favorite with Rory McIlroy. According to OddsShark, Woods and McIlroy are favored to win the green jacket at +900. It would be McIlroy’s first victory, while Woods is looking to win his fifth green jacket. Woods missed the last two Masters, and finished T-17 in his last Augusta appearance in 2015. Many expect things could be different this time around as Woods is playing his best golf in years.

Woods has enjoyed a lot of success at Augusta over his career, but his last top five Masters finish came in 2013. While Woods was moving up the odds, others were moving in the other direction in Vegas. Dustin Johnson moved from +900 down to +12000. Like Woods, Johnson also missed the 2017 Masters. Johnson fell at his rental home in Augusta sustaining an injury that caused him to pull out of the tournament at the last moment.

“Probably [took] a good five months [to recover],” Johnson told Golf World. “It took a long time to recover from it, for sure…But that kind of threw me off there, I struggled for awhile after that…I’m seeing signs of I’m hitting the shots, they’ve got the right patterns, and I’m hitting the shots that I’m seeing. It’s just more my cut’s starting to come back where I’m hitting it with irons and with the driver. Where every shot’s starting to cut again. So that’s pretty much it. Just need a little more practice, need to really work on the wedges here the next few weeks to get ready for the big part of the season.”

Here’s a look at the latest 2018 Masters odds courtesy of OddsShark. 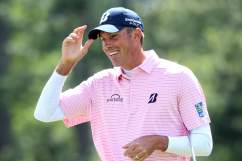