Rickie Fowler has been known not to take himself too seriously. In recent years, Fowler has engaged in self-deprecating humor involving his single status. Those jokes are in the past as Fowler is dating Allison Stokke, a former Cal pole vaulter.
According to Page Six, Stokke has fitness model deals with a number of companies including Nike, Athleta, Uiqlo and GoPro.

Fowler may not be single anymore, but his sense of humor has not changed. He posted this photo with the two of them in their holiday onesies on Christmas Day.

Merry Christmas from both of our families to yours!!

Stokke became well-known after a photo of her competing at a pole-vaulting competition went viral. Stokke spoke with ESPN W about how it impacted her life moving forward.

“My response back then, in 2008 — was I flattered?” Stokke explained to ESPN W. “In some ways, sure. But I was overwhelmed, too. And I think my response to being overwhelmed was to just stay away from it entirely. But now, I’m trying to figure out how to reclaim it and own it and push it in the right direction. And benefit from it — in terms of fueling my training. And if I try to ignore it, it will take on a life of its own. Which is what I did in college: ignore it. And I lost control of my own story.”

Learn more about Fowler’s girlfriend along with his dating history.

Back in 2017, news of Fowler’s relationship with Stokke broke in an odd way. According to Golf Digest, there were hints there could be something between the two when they posted photos on Instagram of them attending a motocross race. Jason Day may have been the first to announce their relationship to the world after he mentioned Fowler’s “girlfriend” in a press conference.

During a press conference for the Zurich Classic, Day mentioned calling a meeting which Fowler was absent from as Day said Fowler was spending time with his “beautiful girlfriend.” Fowler started covering his face in embarrassment after Day’s comment.

Thanks a lot, partner! Looks like you can call off the #FindRickieAGirl campaign!

Fowler cleared things up in May 2017 by posting a photo of the two of them along with a clever hashtag.

“When you wish you could still be on vacation! #RickFoundaChick,” Fowler posted on Instagram.


2. Allison Was Rickie’s Caddie at the 2018 Masters Par 3 Tournament

GettyAllison Stokke plays caddie for Rickie Fowler at the 2018 Par 3 Contest at Augusta.

During the 2017 Masters, Fowler was making jokes about his single status, posting a photo of himself standing amidst couples kissing during the Ryder Cup.

A year later, Fowler was joined in Augusta by Stokke, who was his caddie for the Masters Par 3 Tournament. The tournament happens the day before the start of the Masters, and is a chance for golfers to have fun with their spouses, kids and significant others. Stokke is used to the spotlight after a photo of her competing as a high school pole vaulter went viral. Her mother, Cindy Stokke, spoke with ESPN W about how the attention impacted her daughter.

“I think I saw her grow up faster,” Cindy told ESPN W. “She saw how the world can be, saw how some people can be really cruel, some people can be great. I think she realized, ‘I can’t be so concerned about what everyone else thinks; I have to pursue my career and my dream and my sport.'”


3. Allison Was the Top High School Pole Vaulter in the Coutry in 2008 & Competed at Cal

Stokke was still in high school when she became famous after a photo of her competing went viral. Stokke has worked hard to be known for her accomplishments rather than the image.

Stokke graduated from Cal where she majored in sociology, and also competed as a pole vaulter. According to ESPN W, Stokke briefly gave up pole vaulting to pursue a master’s degree, but she missed it too much so Stokke quickly picked the sport back up.

4. Rickie Was Previously Dating Lauren “LB” Barr, a Former Contestant on The Bachelor

Prior to his relationship with Stokke, Fowler was dating Lauren “LB” Barr, who was a former contestant on the television show The Bachelor. The couple posted pictures of themselves out and about, including taking in an Oklahoma State game. Fowler previously dated model Alexis Randock. There was no word on the breakup, but pictures of the two together stopped appearing on social media.

Randock was in attendance when Fowler won the 2015 Players Championship. After their breakup, Fowler was taunted at the 2016 Waste Management Phoenix Open, who has a notoriously rowdy crowd. Some of the fans in attendance were chanting “Team Alexis” at Fowler while he was walking on the green.

61 – that was fun!! Glad I could have @allisonstokke there with me every step of the way!! A nice way to finish off the calendar year and big thanks to @tigerwoods @tgrliveevents for another great event! Those @cobragolf F8’s worked just fine?

Fowler posted a photo of the couple on his Instagram page on Valentine’s Day with a lengthy message about his girlfriend.

“My Valentine! This last year has been nothing but the best! My best friend, sprint coach, training partner…I’ll be your sous chef any day! Thanks for being you! To many more! Happy Valentine’s Day! Love you babe,” Fowler posted on Instagram.

Stokke also posted a photo of the couple on Valentine’s Day. 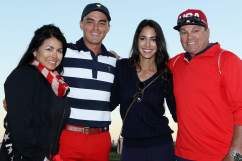