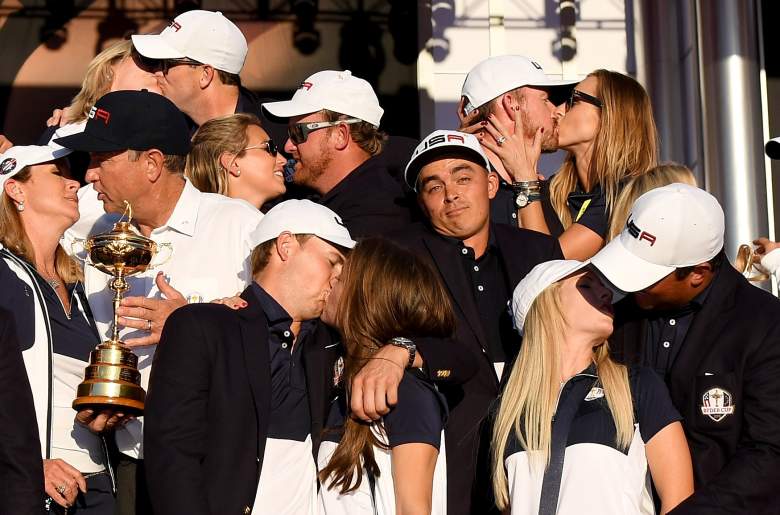 Rickie Fowler has been no stranger to self-deprecating humor. (Getty)

Rickie Fowler has been linked to different women throughout his career including his ex-girlfriend, Alexis Randock. There was a brief stretch where Fowler was single, and had no problem poking fun at his status.

All indications are he is now dating pole vaulter Allison Stokke. Since the Masters ended, the two have posted photos of themselves hanging out on various occasions including the Circuit of the Americas.

Prior to dating Stokke, Fowler was single, and was having fun at his own expense.

At the beginning of 2017, Fowler re-posted the above photo on Instagram with the caption: “Rolling into ’17 like”.

The photo was taken at the Ryder Cup and featured several golfers kissing their significant others. Fowler had no one to kiss and his reaction is priceless.

Fowler had been dating model Randock, but the two broke-up for an undisclosed reason. Fowler was linked to former “Bachelor” contestant Lauren “LB” Barr, who is a fashion buyer in Stillwater, Oklahoma.

Both have the Oklahoma State connection as this Instagram photo shows. Fowler graduated from Oklahoma State.
https://www.instagram.com/p/-pfbiHLV2c/

The photo was taken over a year ago and the two have gone their separate ways based on Fowler’s funny Instagram post. On the golf course, Fowler is off to a good start to 2017.

In the seven tournaments Fowler played in heading into the Masters, he had top-10 finishes in four events. Fowler won the Honda Classic in late-February. He is still looking for his first major, but had an impressive run at the 2017 Masters.

Golfer Jason Day referred to Fowler hanging out with his “girlfriend” in a recent interview.

By the looks of things, Fowler will not be able to joke about being single any longer.