Krista Glover, the wife of professional golfer Lucas Glover, is accused of battering her husband and calling him names because he played poorly during the Players golf tournament over Mother’s Day weekend.

An arrest report also accuses Krista Glover of telling her husband when he plays golf tournaments that “he better win or her and the kids would leave him and he would never see their kids again.”

The St. John’s County Sheriff’s Office website states that Krista Conley Glover was released on $2,500 bail and gives her address as Jupiter, Florida. She was booked on May 12, 2018 at 10:22 p.m. and was released on May 13 on charges of battery and resisting an officer, according to the online court records. According to ESPN, Lucas Glover “missed the 54-hole cut at The Players Championship.” He is the former U.S. Open champion.

An arrest report paints a disturbing picture of the allegations, saying that the poor showing at the Players left Glover’s wife irate – and it allegedly wasn’t the first time. You can see more photos of Krista Glover and of the couple later in this article.

1. Lucas Glover Told Authorities His Wife Yells That He’s a Loser When He plays Poorly in a Tournament, Reports Allege

When authorities arrived at the couple’s Florida rental property, they found a chaotic scene. Present were Lucas Glover, his wife, and his mother, Hershey Glover, according to the arrest report obtained by Heavy. You can read the report in full here:

Lucas told authorities “the altercation began earlier in the evening after playing a bad round of golf. Lucas advised me every time he plays poorly in a tournament, Krista begins yelling at him stating he is a ‘loser’ and ‘p*ssy’ and ultimately starting an altervation with him about his performance.”

Lucas told authorities that Krista “had been drinking throughout the day, and after playing a bad round of golf today, she began yelling at him in front of their kids and his mother,” the report states. “Lucas advised Krista to stop the argument, while in front of the kids.” She put the kids to bed and Lucas was relaxing on the porch when she “began a physical altercation with him causing a laceration to his arm,” according to the Florida incident report.

A 911 call was placed that night by Krista. Krista says: “I’ve been attacked by my mother-in law. She’s locked herself into the room, and she attacked us.” However, Lucas then gets on the phone and says: “This is the sane one of the bunch….My wife has called you… and now she’s trying to blame it on my mother, which is not the case at all… my wife is going crazy…. I don’t think anybody needs to come out here.” Glover said that the deputy should talk to him when arriving because “these other two are out of their head at the moment.”

Lucas Glover wrote on Twitter: “On May 12, my wife and mother were involved in an argument to which police were called. Everyone is fine. Regrettably, although Krista was charged, we are comfortable that the judicial system is able to address what actually happened and Krista will be cleared in this private matter.” He then asked for privacy.

However, the arrest report contends that Lucas Glover described the situation differently that day. Lucas Glover is a 6-foot 2-inch, 195-pound professional golfer from Greenville, South Carolina. His FedExCup rank was 95 in May 2018, and he had 318 FedExCup points and a 71.065 scoring average. He turned pro in 2001 and is 38-year-old, according to his PGA bio. He has three PGA Tour victories. He graduated from Clemson University in 2005. In addition to the 2009 U.S. Open Championship, Glover won the 2005 Funai Classic at the Walt Disney World resort and the 2011 Wells Fargo Championship.

There is a pretrial in the case on June 22. 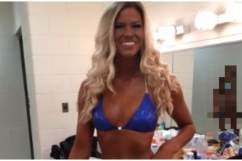 Krista Glover with the couple’s children.

The arrest report alleges that the officer, upon arriving, saw a male and female standing on the front porch in a verbal altercation. Krista Glover met the officer in the roadway and stated there was an altercation, however “everything was fine and did not wish to have their information shared because of who they were.” She said that her mother-in-law attacked her. The officer saw no signs of an altercation or injuries on her person, however, and a different story emerged with Krista as the actual perpetrator, according to the arrest report.

Lucas Glover and his mother Hershey Glover during the final round of the Wells Fargo Championship at Quail Hollow Club on May 8, 2011 in Charlotte, North Carolina.

The officer then approached the residence and found Lucas on the front porch and Hershey Glover, his mother, in the den. The officer observed multiple lacerations to Hershey’s left and right arm with blood on her clothing and skin. Hershey said she was hit in the chest during the altercation, according to the arrest report. She refused a medical evaluation, the report alleges.

Lucas “stated to myself and his mom he was tired of the altercations and Krista always acting the way she does, and to go ahead and tell me (the deputy) the truth of what happened,” says the report.

Hershey said that Lucas and Krista were in an altercation, the report alleges. Hershey stepped in to stop the situation at which time “Krista turned her aggression from Lucas to Hershey. Krista began striking Hershey in the arm, causing the lacerations to her skin,” the report alleges. “Lucas separated both parties and told them to go to their respected (sic) rooms.”

Hershey stepped in and told Krista to stop, at which time Krista “redirected her anger and the altercation from him to his mom,” says the disturbing report.

Little chilly in London. Thanks for the trip @cillesmom #lovebirds pic.twitter.com/K1ykVoQWQ8

The arrest report alleges that Lucas Glover changed his story after Krista’s father arrived and he saw Krista being placed in handcuffs.

Lucas “became irrational” after Krista was in handcuffs, the report alleges. The deputy escorted her to the patrol car. Lucas changed his previous statements and “then stated he was not fighting with Krista and received the laceration during the altercation between Krista and Hershey.”

Krista continued to yell at her dad and Lucas from the back of the patrol car, the report accuses.

However, then Lucas allegedly said he wanted Krista’s father to hear what has been happening as he was not aware of Krista’s actions and how she was treating him. Again, “Lucas stated how every time he plays a bad round of golf Krista proceeds to start an altercation with him and telling him how he is a ‘loser’ and a ‘p*ssy’ how he needs to fire everyone and how he better win or her and the kids would leave him and he would never see their kids again.”

He said he couldn’t take it anymore. Lucas “continued changing his story and how no physical altercations occurred” after talking with Lucas and Krista’s father, said the report.

4. Krista Is Accused of Saying ‘This is Why Cops Get Shot in the Face’ & Brought Up ‘The Tour’

According to the arrest report, Krista made incendiary verbal statements on the way to jail. First, alleged the report, Krista complained she was hurting due to the handcuffs being too tight.

Then, she said on the way to the jail “wait till the Tour hears about this, you will lose your job” and “this is why cops get shot in the face” and “wait till I talk with the judge you will be f*cking fired over this,” alleges the report.

The report also accuses Krista of resisting without violence. “While escorting Krista to the patrol car, after restraining her in handcuffs, Krista began forcefully attempting to separate herself from the control of Deputy Schneider,” the arrest report says. “Krista was refusing to sit in the patrol car and resisted being placed in the car by continuing to tense her body and blocking herself from sitting down in the car. While attempting to place Krista in the car, she proceeded to wrap her legs and feet around the door and frame of the car preventing the lower half of her bodily from entering the vehicle.”

5. Krista & Lucas Glover Have Two Children & He Referred to Himself as a Lucky Man

New Years in London ain't bad! Thanks for the night @griffo59 #mocktail4theMrs pic.twitter.com/HwA3W3sMxa

Lucas and Krista have two children and live in a rental property, the arrest report says. On Twitter, Lucas sometimes shares photos of his wife and kids. With one photo of Krista holding the two children, he included the hashtag #luckyman. He wrote with another picture that the couple spent New Year’s in London. On another photo of Krista with the couple’s daughter, Lucas wrote, “Most thankful for these 2 beautiful ladies. #luckyman.” On Facebook, Krista plastered her page with photos of the couple’s children. “My two loves … Who is more enamored with who?!! :-)” she wrote with one photo of her husband holding their baby.

The couple’s children were born in 2013 and 2015. Lucas’s player bio for the PGA says that he is a “passionate Clemson Tigers sports fan. An avid reader, particularly mysteries and thrillers. Read four books during the week of his rainy 2009 U.S. Open victory.”

The bio says that Lucas “credits his grandfather, Dick Hendley, for giving him his start in golf. Grandfather gave him a cut-down club when he was 3 and first took him to the Masters at age 6. Hendley was a standout in football and baseball at Clemson, where he is a Hall of Fame member and played one season (1951) with the NFL’s Pittsburgh Steelers. Was inducted into the Clemson Athletic Hall of Fame in the fall 2007.”

The arrest report accuses that Krista Conley Glover “did actually and intentionally touch or strike Lucas Henley Glover against his will.”

“Lucas and Krista are in an intimate married relationship, and reside as a family with their two kids. While at the residence, Krista forcefully attacked Lucas, causing injury to his right arm,” alleges the report, adding that “during the altercation, Lucas’ mother, Hershey H. Glover, intervened in the altercation to tell Krista to stop. At this time Krista diverted her attention, and the attack, from Lucas to Hershey. During the altercation with Hershey, Krista caused multiple lacerations to both of Hershey’s arms. Due to the injuries observed on Lucas’s arm and his verbal statements made, probable cause was established to arrest Krista for Domestic Battery.”