Getty Kyrie Irving will not return at any point of the NBA playoffs.

The Celtics are one game away from the NBA finals, causing some fans to wonder if the door is open for Kyrie Irving to make a return if Boston is able to defeat the Cavs in Game 7. Prior to the start of the playoffs, the Celtics announced Irving would undergo season-ending surgery to remove two screws from his right patella.

If the Celtics make the finals, Irving would not be able to play as he is still in the very early stages of a four to five month recovery. Here’s a look at the April 5 press release the Celtics issued announcing Irving will miss the entire 2018 playoffs.

This Saturday, Celtics guard Kyrie Irving will undergo a procedure to remove two screws implanted in his left patella after the patellar fracture he suffered during the NBA Finals in 2015. Following a mid-March procedure to remove a tension wire that had been implanted at the same time as the screws, pathology indicated the presence of a bacterial infection at the site of the hardware. To ensure that no infection remains in the knee, the screws will be removed. The fracture in Irving’s patella has completely healed, and his knee remains structurally sound. He is expected to make a full recovery in 4-5 months.

This timeline should give Irving enough time to be able to participate in training camp prior to next season. Boston had tried resting Irving, but his knee did not seem to be recovering no matter how much time away from basketball Irving had. Irving’s last game came March 11th where he only played 16 minutes against the Pacers. Dr. Derek Ochiai, an orthopedic surgeon at the Nirschl Orthopedic Center, spoke with the Sporting News about the outlook for an injury such as the one Irving has been battling.

“That’s definitely a concern,” Dr. Ochiai told Sporting News. “We don’t know everything obviously, but when you have an infection with hardware, that has the potential to cede the bone. So the infection goes to the bone, which is called osteomyelitis. That can be really difficult to treat…Best-case scenario, there is no osteomyelitis, no bone infection, no bacteria, and they’re taking the screws out as a precaution. Once he heals up and the screws are out, he’s fine. That’s best-case.”

The Celtics have been able to make a deep postseason run without Irving or Gordon Hayward. It is reasonable to think Boston would be even more potent with these players in the lineup. Boston was one of the best teams in the league when Irving was playing at full strength. Irving has been mostly quiet since the surgery, but did post a lengthy Instagram message after he found out he would not be returning this season.

The hardest thing to do sometimes is accept the uncontrollable things life throws at you. You try consistently to learn, grow, and prepare everyday to equip your mind, body, and spirit with tools to deal with some of those things, but I feel when those moments arise they all give you a sense of unfulfillment, simply because it puts some of your professional journey and goals on a brief hold. It’s simply a test of your perseverance and Will, to be present, even in the wake of what’s going on. In this case, finding out I have an infection in my knee is definitely a moment that I now accept and move past without holding on to the all the what ifs, proving the nay-Sayers completely f***ing wrong, and accomplishing the goals I’ve set out for the team and myself. This season was only a snapshot of what’s to come from me. Trust Me. “The journey back to the top of Mt. Everest continues.” #StandingRockSiouxTribe

Let’s go Celtics!! Celtics fans, I look forward to hearing how loud it gets in the TD Garden during the playoffs and experiencing how intense the environment gets. Thank you all!

Irving has been seen on the Celtics sideline during playoff games, but he will remain in street clothes if the Celtics are able to keep their championship hopes alive. According to ESPN, Irving was not in attendance for Game 7 of the Eastern Conference Finals, which drew criticism from the likes of ESPN’s Mark Jackson for not being with the team. Jackson called Irving’s presence “more important” than any of the assistant coaches. 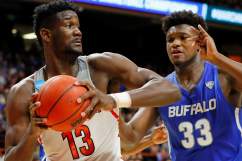