Getty Brooks Koepka of the United States poses with the winner's trophy with Jena Sims after his victory at the 2017 U.S. Open at Erin Hills on June 18, 2017 in Hartford, Wisconsin.

If Brooks Koepka is able to repeat as champion of the U.S. Open on Sunday at Shinnecock Hills, there’s one thing that’s for sure: Joe Buck will get his girlfriend’s name right during the celebration.

The Fox Sports announcer made an embarrassing gaffe after Koepka won last year’s U.S. Open, calling his girlfriend by the wrong name as they kissed following his victory, mistaking Jena Sims (who you can read more about here) with Becky Edwards (who you can read about here).You can watch the mix-up here:

“His girlfriend, Becky Edwards, an all-American soccer player at Florida State,” Buck said as a woman ran up to the new Major champion, greeting him with a kiss.

“Oh, really, look at you up on all the PGA Tour gossip!” Buck responded.

“Hey, I live right near these guys,” Faxon replied. He said he got the right info from a friend who knows Koepka well.

Koepka had recently started dating Sims before the U.S. Open. It is not clear when he and Edwards broke up, but they had dated for several years and she was often seen at tournaments supporting him while they were dating.

Edwards, 30, currently plays pro soccer in Sweden after playing for several teams in the U.S. during her career. She and Koepka, 28, met while they were both at Florida State and they had been dating since at least 2012 prior to their breakup. She caddied for Koepka at the Par 3 contest at the Master’s in 2016.

Special day caddying for @BKoepka in the par 3 contest! Wishing you the best this week ? #TheMasters. pic.twitter.com/quPpxG9nBI

Sims is a 29-year-old Georgia native who has been an actress, model and beauty pageant contestant. It is not clear when she and Koepka began to date, but it was not long before she entered the spotlight during Koepka’s U.S. Open celebration. Sims won the Miss Georgia Teen USA competition in 2007 and later started charity called “Pageants for Hope,” which organizes beauty pageants for children with cancer and other health issues. She told Golf Digest life traveling on the PGA Tour with Koepka has been fun.

“I’m pretty lucky that my actual job isn’t a 9 to 5, so it really gives me flexibility to go out and watch Brooks. This week, I had an audition in the city, so I was able to go watch Brooks [at Glen Oaks in Long Island] and then I went. But it’s nice. I love being able to support Brooks and watch him because he’s so talented. It’s so much fun to watch him,” she said during the August 2017 interview. “He’ll say to me all the time: ‘It must be so boring walking around in the crowd watching me play.’ And I’m like, no way. I actually really enjoy it. I grew up around golf; my dad is a huge golfer. So I really enjoy watching him and being around there. Everyone’s so nice.”

Buck talked about his on-air error during an interview on “The Dan Patrick Show” the next day. “Obviously with your boy Brooks, now we all know who he is dating, especially me,” Buck said. “That’s exciting. I wasn’t up on that information. I got handed a card by a buddy was phenomenal all week and it had old info on it, and you know, we got it right before we got off the air. But that’s not the world we live in these days, you have to do the apology tour for getting the week-old girlfriend wrong. So sorry world.”

“I’ve done way worse than this, that’s the funny thing,” Buck said. “But it was before the age of Twitter and kind-of clickbait stuff, I asked Tony Womack (a now-retired MLB player), at the end of a division series game and he was hugging a woman down on the field, and I was interviewing him from up in the booth and truth be told I couldn’t really see, but we had just been talking about how he lost his dad on Father’s Day that year and I say, ‘Tony, I can’t imagine how that feels, who are you hugging down there, is that your mom?’ Then the needle came off the record and he goes, ‘no, that’s my wife.'”

Buck added, “The only person I feel bad for in the whole situation is his ex-girlfriend. I don’t know her name, I don’t know the name of the current girlfriend — the week-old girlfriend — and I probably won’t know going forward, but good for him.”

Brooks Koepka came to the booth to personally tell me who he is with tonight at the All Star Game. He is thorough. pic.twitter.com/nwnIEExRka

Buck told Patrick he didn’t talk to Koepka and Sims about the mistake after the tournament, joking that he “got the hell out of Wisconsin,” where the U.S. Open was played last year at Erin Hills. But the Fox Sports broadcaster apparently did broach the subject a few weeks later at the All-Star Game, when Koepka visited him in the booth.

“Brooks Koepka came to the booth to personally tell me who he is with tonight at the All Star Game. He is thorough,” Buck tweeted.

Sims told Golf Digest, “My phone LIT up. It was half like, ‘Congratulations to Brooks!’’And the other half were, ‘Did you hear what happened?’ And I was like, of course I did. It was immediate. I was like, It’s OK, life continues. We’re just fine. It was an honest mistake. I think being that we went to Vegas right after the win for five days, we kinda escaped it. We were in our own little world in Vegas celebrating. So we didn’t really have to experience what the media blew it up to be. We were by the pool and the casino just hanging out, no worries about that at all. And Brooks ended up meeting Joe Buck. They’re totally cool.” 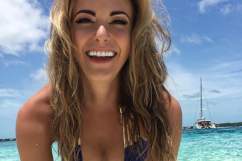