It’s safe to say that Diego Maradona enjoyed Marcos Rojo’s goal for Argentina that gave his country a 2-1 lead over Nigeria. Maradona can clearly be shown flipping off the crowd as the camera panned to him amid the celebrations. Rojo’s goal turned out to be the winner as Argentina crawled into the second round. The team will play France in the second round. Croatia, won Group D, and will play Denmark.

The superstar former Boca Juniors and Napoli player eventually had to be literally carried out of the stand by his handler:

Diego Maradona was having a good time nearly all the way through Argentina’s crunch match with Nigeria in St. Petersburg, despite the pressure his homeland was under. Pre-game he could be seen dancing with a Nigerian fan but it was after his heir apparent scored that we saw the real Maradona. The former No.10 looked possessed as he celebrated Messi’s opener. His reaction to Nigeria’s penalty equalizer was a little more subdued:

He Looked Pretty Angry as the Game Wore On

As the game wore on, Maradona became more-and-more agitated:

It All Started Out Pretty Good for Maradona

Pre-game it was all fun and games:

The World Cup winner was also handed a banner pre game showing an image of him during the World Cup in 1990 in Italy.

Another bizarre image showed Maradona appearing to embrace the God-like worship that fans in Argentina have for him:

Maradona’s appearance at this game comes after he was severely criticized for allegedly making a racist gesture to some South Korean fans. During the same game, Maradona was shown to be smoking a large cigar in a non-smoking stadium. 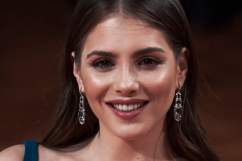