LeBron James, the on-again, off-again face of the Cleveland Cavaliers and current King of the NBA, has been around for a while. He’s half way through his second decade of professional basketball in the NBA. Over that span, he’s garnered countless awards, three championship rings, and more accolades than is practical to list.

Also, over the course of his career, many a joke has been made at his expense. It seems every time basketball fans turn around, another LeBron James meme is making the rounds on the internet, poking fun on a wide variety of topics. Conversely, LeBron’s likeness has been used on offense, so to speak, as a way to skewer other players.

Here are some of the funniest LeBron James memes of all time. Or, at least, those that are fit to print.

LeBron’s shrinking hairline has long been the subject of ridicule. But NBA fans aren’t the only ones in on the joke. As Complex reported in 2015, his appearance changed slightly in NBA 2k14 from the previous version of the game, in order to compensate for his shifting hairline.

“They even did our man dirty in the video games, bumping the headband up a good 3 inches to reflect reality. I can’t wait for the fully-immersive Oculus experience where you can actually feel the cool breeze atop your scalp as you digitally run down the virtual court,” the Complex story reads.

According to NBA.com, the air conditioning stopped working during the first game of the NBA Finals in 2014, a match-up between the San Antonio Spurs and LeBron’s Miami Heat. LeBron appeared to be affected more than the other players, and eventually developed painful cramps. As a result, he had to be carried off the court by his teammates. Naturally, the internet has yet to let him live it down.

3. The Return of the King

When LeBron left his hometown Cleveland Cavaliers to seek a championship with the Big 3 in Miami, fans were devastated. They were also furious by a move that they considered betrayal of the highest order. The announcement was made in the overblown pageantry of The Decision, an ESPN special produced around LeBron’s free agency options.

As reflected in the image macro above, many Cavaliers fans burned their LeBron James jerseys in reaction. Those same fans, as the “Kermit the Frog Iced Tea” meme suggests, seemingly welcomed him back with open arms when he returned to Cleveland in 2014.

Another thing basketball fans have lambasted LeBron for is his free throw shooting. While he’s managed to improve every other aspect of his game, shooting from the foul line has not been his forte. One fan must have thought it was so bad that he’d made enough bricks — errant shots — to help President Donald Trump with his border project.

5. A Game Consists of 4 Quarters

Another LeBron meme is his tendency to fade as the game progresses. Among the image macros found for this meme are a confused-looking LeBron thinking there are three quarters in a game. Another one, as seen above with Miami Heat coach Erik Spoelstra, indicates you can trick LeBron into playing well in the fourth quarter by telling him there are actually five.

For more LeBron James memes, check out this post: 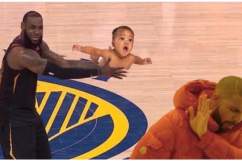