Instagram Thomas Mueller of Germany plays with the ball during the Germany training session ahead of the 2018 FIFA World Cup at CSKA Sports Base Vatatinki on June 14, 2018 in Moscow, Russia.

The 2018 World Cup begins today, but while many are waiting for the games to begin, others are looking forward to the opening ceremony. Who are the performers taking the event by storm this year? Singer Robbie Williams (pictured above) is this year’s 2018 World Cup headline performer, according to Telegraph. He will also be joined by some other big names and hundreds of dancers. This year’s opening ceremony will focus even more on musical acts than in the past.

When talking about his headlining gig to Telegraph, Williams exclaimed, “I’m so happy and excited to be going back to Russia for such a unique performance. I’ve done a lot in my career, and opening the FIFA World Cup to 80,000 football fans in the stadium and many millions all over the world is a boyhood dream … We’d like to invite football and music fans to party with us in Russia, in the stadium, or to tune in their TVs a little earlier for an unforgettable show.” Russian soprano Aida Garifullina, of the Vienna State Opera, will join Williams for his big set, as reported by FIFA.com. Garifullina guhed to FIFA that, “I never imagined I would be part of this huge celebration, the World Cup, happening in my own country.” 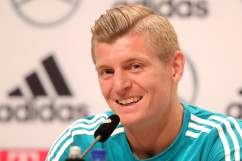 Additional opera performers, who are taking the stage together for the opening event, are Placido Domingo, Anna Netrebko, Yusif Eivazov, Ildar Abdrazakov, Albina Shagimuratova, and Peruvian tenor Juan Diego Florez. Pianist Denis Matsuev will also participate. When speaking with Telegraph, some of the tournament organizers said that, “It is interesting that football events are usually opened by opera stars, because classical music is a universal code understood by residents of every country.”

Another big performance set for the event is by Will Smith, Nicky Jam and Kosovar Albanian singer Era Istrefi. They will perform this year’s official World Cup song “Live It Up”. Diplo served as producer.

The ceremony oped with a pre-recorded segment, filmed outside and overhead the stadium. A young soccer player kicked a ball through countless distractions and scenes as an orchestra performed and pianist Matsuev played. After the segment aired, the young player walked out on to the field and grabbed hands with headline performer Robbie Williams, who then confidently walked to the middle of the field. Williams was surrounded by dancers, who were decked out in soccer-inspired attire. For his set, Williams delivered his song “Let Me Entertain You”, decked out in a red and black, animal-printed suit.

Soon, the scene slowed down a bit, as opera singing flooded the field and a giant, feathered bird carried Aida Garifullina to meet Williams on the field. Dancers and aerialists then gathered around Williams, spelling out the word love in the field.

After another brief performance, Garifullina joined Williams in a duet of his song “Angels”. As the camera panned away from the two performers, an outline of a soccer ball was shown surrounding them. Flag bearers and representatives from countries around the world took the field as the two singers carried out their performance.

And just when fans thought the performances were over, Williams pumped up the crowd once again, exclaiming, “Can I kick it?!” Garifullina left the field and Williams delivered a spirited performance of “Rock DJ – Can I Kick It”, along the side lines, so that the field could be cleared to make way for the big game. With a few performers with him at the end, Williams then finished up his performance at the center of the field.

During Robbie Williams’ performance, what really got the Twitter-sphere going was when he flipped off the cameras. See a shot of Williams giving the finger to the cameras in the below tweet.

Read More
Celebrities, TV, World Cup 2018
Who is performing at the 2018 opening ceremony of the World Cup? Get the rundown on the performers.