Getty Once the Round of 16 begins, extra time is introduced to the World Cup.

World Cup games can no longer end in a tie now that the tournament has advanced to the Round of 16. Draws are only permitted in the group stage where there is a point system used to determine who advances out of the group. If a game ends in a tie at the end of regulation time, the match goes into extra time with two 15 minute periods. There is no golden goal so teams are guaranteed to play both periods for a total of 30 minutes plus stoppage time. Here’s how FIFA explains the “overtime” rules.

Each match shall last 90 minutes, comprising two periods of 45 minutes, with a half-time interval of 15 minutes. If, in accordance with the provisions of these Regulations, extra time is to be played as the result of a draw at the end of normal playing time, it shall always consist of two periods of 15 minutes each, with an interval of five minutes at the end of normal playing time, but not between the two periods of extra time. If the score is still level after extra time, penalty kicks shall be taken to determine the winner in accordance with the procedure described in the Laws of the Game.

Teams are allowed to pick the five players to attempt the penalty kicks along with the order of the players attempts. Why are some soccer games allowed to end in a tie, while others extend into penalty kicks? Penalty kicks are a somewhat rare occurrence in soccer. The reason is the majority of leagues all over the world operate on a points system where three points are awarded for a win, and one point is given to each team in a draw.

The only time penalty kicks are needed is after extra time ends in a tournament like the World Cup where a clear winner is needed to advance in the bracket. Once the Round of 16 starts, the World Cup functions as a single elimination tournament. Otherwise, a tie signifies neither team demonstrated a clear advantage in the match, and both teams earn a point rather than a loss. 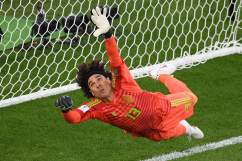 Read More
Soccer, World Cup 2018
Can games end in a draw during the World Cup? Find out the extra time rules for the World Cup once the Round of 16 begins.