Getty Penalty kicks are a possible outcome in the World Cup once the tournament hits the knockout stage.

Once the World Cup Round of 16 begins, extra time rules kick in if a game ends in a draw as there is no longer a points system in place. The game will go to penalty kicks if the match is still tied after two fifteen minute periods have been completed. Penalty kicks start with each team receiving five kicks. Here’s the details on how teams can select players, according to FIFA.

Each team is responsible for selecting the players from those on the field of play at the end of the match (or temporarily off the field) and the order in which they will take the kicks. Each kick is taken by a different player and all eligible players must take a kick before any player can take a second kick. Only the eligible players and match officials are permitted to remain on the field of play when kicks from the penalty mark are being taken.

The 2014 World Cup matchup of the Netherlands and Costa Rica provided a bit of penalty kick strategy. The Netherlands subbed out goalkeeper Jasper Cillessen for Tim Krul at the 120th minute to allow him to be the goalie during penalty kicks. The risky move worked out as the Netherlands advanced thanks to Krul’s stellar performance.

While the penalty kick period begins with each team attempting five kicks, this does not always solve things as teams can remain tied after five goals. In this scenario, penalty kicks continue until a team holds an advantage after the same number of attempts. Here’s how FIFA describes the additional penalty kicks.

There are also requirements for the actual structure of penalty kicks, including making sure the goal keeper remains on the goal line as well as watching for infringement. Before each kick can take place, a referee is required to ensure the following things.

For all its excitement, penalty kicks can seem like an arbitrary way to end a closely contested match. It is why soccer uses a points system where ties are a regular outcome for games. However, in major tournaments like the World Cup there has to be a way to decide who will advance. Click here to read a full rundown of FIFA’s penalty kick rules for the World Cup. 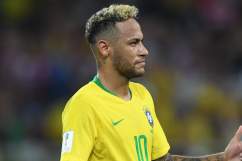 World Cup Overtime Rules: Can Games End in a Tie in the Round of 16?