10:58 – Seth Rollins wins by disqualification. The show ends with Roman Reigns coming out of nowhere and Superman Punching McIntyre for his cheap shot.

10:55 – Rollins opens with a dropkick and a kneeling armbar that causes visible pain to Ziggler. Ziggler stands up and backs up against the ropes, however, breaking the armbar with a dirty move. Rollins recovers with a hip toss and a huge dropkick that sends Ziggler out of the ring. The match rages on, with brutal hits being landing on both sides, but suddenly Drew McIntyre comes out of nowhere and attempts to cheap-shot Rollins so that Ziggler can pin him.

The referee sends McIntyre to the back of the arena. Rollins goes for the superplex but Ziggler blocks him and they switch positions. McIntyre then returns and throws the referee out of the ring so that he can get in the ring and beat on an exhausted Rollins.

10:34 – We come back from break to see Owens trying to escape in his car. As he walks out to the parking lot, however, he sees that Strowman has turned his car over and wrecked it. Strowman walks off content.

10:30 – Strowman and Owens win. They claim the victory with a countout. Owens offers Strowman a handshake, but the latter just stares at him, and Owens takes off running. We cut backstage, where Owens is hiding in a locker.

10:10 – Owens and Balor start, but are quickly tagged out so that Strowman can lay into Corbin. Strowman coordinates a merciless offense between a Stereo Cannonball and a Stinger. Balor and Owens re-enter and take their fight out of the ring and onto the ramp. Strowman tags back in and finishes Corbin off in brutal fashion.

9:57 – Mojo Rawley comes out and says he’s embarrassed to be here. No Way Jose does a whole bit with a man in a hamburger costume, but Rawley clocks him across the face for his antics. We cut backstage to find that Angle has decided to send Bayley to mandatory counseling next week.

9:50 – We go backstage to find Angle talking to referee Jone Cone. Kevin Owens then rolls up to complain about being paired with Strowman, and that he has no chance to be friends with him. Angle suggests that maybe they’ll hit it off.

9:48 – The Riott Squad wins. They get Banks with a pinfall. After the match, Bayley jumps Banks and beats her down. Bayley unloads everything she’s got until Banks is sprawled out on the floor.

9:41 – The Riott Squad have command of this match from the start. They hit Ember Moon with a nearfall, and nearly take out Sasha Banks with a jackknife pin. Banks manages to recover, but its too little too late, and she is the last one to be taken down.

9:38 – Seth Rollins is interview backstage, where he says he has no excuse for losing last week. We then cut to Jinder Mahal and Sunil Singh, who are in the middle of a photo shoot before The Riott Squad shows up and smashes their camera.

9:35 – Natalya wins. She takes the match by submission.

9:20 – Bliss has a bodyscissors on Natalya, but the latter has the aggression on her side, and she takes it to the champ. She reverses a Michinoku Driver, and reverses a Russian legsweep on Bliss for a nearfall. Jax momentarily distracts Bliss, and Natalya hits her with a Sharpshooter.

9:15 – Bliss tries to dismiss Natalya but she says she talked to Kurt Angle and he made a match between them tonight. Natalya adds that Nia Jax is in the building.

9:10 – Alexa Bliss enters the ring with Mickie James at her side. Bliss starts mocking Ronda Rousey, calling her a spoiled brat and saying that she doesn’t even know the rules of WWE because everything she did at Money in the Bank is legal. Natalya enters and says its only 23 days until Rousey’s suspension is up, and when it is, Bliss will regret ever stealing the title shot from her.

9:06 – Angle complains to Corbin in his office, but Corbin criticizes him for ruining several tag teams. Finn Balor comes in to talk about the multi-man match that got cancelled and Corbin says he should be thankful because he would’ve embarrassed himself anyway. Braun Strowman comes in and says he wants to team up with Kevin Owens tonight, given how tough things have been for him lately. Angle asks who he’d want to fight and Strowman suggests the other two men in the room.

9:00 – Authors of Pain win. They win by pinfall. They continue to beat on the Gibson Brothers even after the match has ended.

8:55 – The Authors of Pain take command of the fight early on, and never relinquish it. They scoop up Rex Gibson and slam him into the floor and even after Rex tags in Rich, things don’t get much better.

Authors of Pain vs. Gibson Brothers

8:50 – Kurt Angle walks up to Bayley to tell her that she has to team with Banks tonight against The Riott Squad. Bayley protests, but Angle gives her no choice.

8:47 – Curis Axel wins. He reverses a superplex and gets a pinfall against Hardy. We cut backstage to see Sasha Banks arguing with Angle before the commercial break.

8:45 – Hardy starts out strong, smashing Axel into the turnbuckles, but the latter fires back with strong hits of his own.

8:40 – After another parody video from The B-Team, they enters the ring. They are dressed as Hardy and Wyatt, mocking their remarks about entering the lion’s den.

8:36 – Matt Hardy calls out the B-Team backstage, making fun of their parody last week. Bray Wyatt adds that the B-Team are so fixated on their prize that they don’t realize they’re wandered into the lion’s den.

8:33 – The Revival wins. Wilder drops a schoolboy on Reigns and wins by pinfall.

8:23 -The Revival jump Reigns and Lashley at the bell but the latter two regain their footing and put up a good fight. Lashley takes The Revival out with belly-to-belly suplexes, and Reigns drops a spinebuster on Scott Dawson. Reigns then hits Owen Wilder with a Superman Punch after Dawson tags him in. The Big Dog gets ready to finish The Revival off, but they mount a comeback and are able to overpower them.

8:18 – The Revival enter the ring and pitch a rematch of their fight from last week. Corbin makes it happen and Angle calls for a referee before we go to break.

8:15 – Lashley says he’s the only one who can actually beat Lesnar. Angle then announces that the multi-man match is cancelled because Lesnar has pulled out. Lashley says that maybe if Lesnar had an actual challenge, instead of Reigns, than maybe he’s show up. Reigns then pitches a match between the two of them tonight, but Angle says he has other things to worry about, and will consider a singles match between them at Extreme Rules.

8:10 – Roman Reigns enters and cuts off Angle. He says he wants to hear what Angle has to say to his face, but he too gets cut off by Bobby Lashley. Lashley says that Reigns has proven that he can’t beat Lesnar in the past, and that he needs to move on. Reigns fires back by reminding the audience that Lashley quit to go do MMA, and that he hasn’t done anything since he’s been back.

8:03 – The show opens with a graphic in memory of the late wrestler Vader. After that, Kurt Angle walks out with Baron Corbin. Angle tells the audience about the multi-man match he set for Extreme Rules, and that Paul Heyman has been starting rumors about Brock Lesnar’s contractual status. 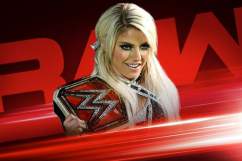