Getty Chicharito sporting a new blonde look ahead of Mexicos game against Brazil.

Heading into Mexico’s big match against Brazil, Javier “Chicharito” Hernandez is sporting a new haircut. Chicharito bleached his hair blond, and some of his teammates joined him, including Miguel Layon. Why did Chicharito go with a new blond look against Brazil? According to The Sun, it is a soccer tradition that demonstrates unity, and dates back to the Romanian team at the 1998 World Cup.

It follows a long line of stars dying their hair at major tournaments, a trend made famous by the Romania team at the 1998 World Cup in France, who showed their collective spirit by unveiling their bleach blonde barnets to go with their yellow jerseys.

Two years earlier, Paul Gascoigne had done the same, when playing for England at Euro 96 and he came up with a maverick string of performances, culminating in his magical goal against Scotland.

Some have suggested Chicharito was looking to troll Neymar with his new look given Neymar also has blond hair. Coincidentally, Neymar also changed his hair style for the Round of 16, going instead with his natural black hair color. While the players are trying to stay loose, Mexico manager Juan Carlos Osorio admitted the team has a “titanic” challenge against Brazil.

After Mexico’s loss to Sweden, Chicharito took to Instagram to post a heartfelt message to fans (translated).

“We passed thanks to Korea, we classified thanks to our work. We did not lose by a–holes, in fact we classified and gained consciousness because we had a great rival and mentally we saw where to improve. It is clear that we have everything to gain and we continue to work especially mentally and emotionally. Let’s enjoy the classification and learn from the mistakes. Support us even if it does not go as you would like,” Chicharito posted on Instagram.

Mexico knew they were in for a challenge against Brazil as goalkeeper Andres Guardado explained to The Washington Post.

“We’re up against the perfect scenario against Brazil, the five-time champions, and it’s a great scenario,” Guardado noted to The Washington Post. “We’re all really excited about this opportunity football has given us, a situation that can’t get any better, and hopefully we’re able to finally take this step.”

Here’s a look at some of the photos of Chicharito’s bright new look.

Neymar got rid of the blonde… Layun & Chicharito went blonde. Hope the change comes with some luck ?? #mexico #worldcup pic.twitter.com/bWs4nClRd3

Chicharito and some Mexico teammates bleached their hair before their round of 16 match. pic.twitter.com/4Vw1EYrIqz 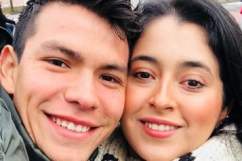