Getty Croatia's President Kolinda Grabar-Kitarovic cheering on her team at the 2018 World Cup.

Grabar-Kitarovic has been all over Russia cheering on Croatia during their historic World Cup run. Prior to the final, Grabar-Kitarovic spoke with NDTV about the excitement of the team’s play in the tournament.

“I feel extremely excited, I don’t know how I will wait until Sunday,” Grabar-Kitarovic explained to NDTV. “Regardless of Sunday’s result, which I believe will be a victory, we are winners. I go for the final not only as a politician or president… but as a passionate fan of Croatian football… as someone who played football in childhood. I hope for fair play and a good atmosphere. I’m not good at that. The result is not important, only that it is a victory.”

Grabar-Kitarovic’s support during the World Cup has prompted many memes, often comparing her to the leaders of the country Croatia is playing. Grabar-Kitarovic earned an undergraduate degree at the University of Zagreb, and went on to also earn a Master’s degree at the same university. Prior to her presidency, Grabar-Kitarovic has had numerous other positions including the Minister of Foreign Affairs and European Integration as well as the Assistant Secretary General for Public Diplomacy at NATO.

In a narrow victory over Ivo Josipovic, Grabar-Kitarovic became the first woman president of Croatia. According to BBC, Grabar-Kitarovic earned 50.5 percent of the votes. She is part of the politically conservative Croatian Democratic Union.

“I will not let anyone tell me that Croatia will not be prosperous and wealthy,” Grabar-Kitarovic said after she was elected, per BBC.

BBC detailed how Grabar-Kitarovic’s victory signaled change within the country.

The challenger’s win is a sign that Croatia may be shifting to the right after the centre-left coalition’s failure to end six years of downturn. The election was seen as a key test for the main parties ahead of parliamentary elections expected to be held towards the end of 2015. The gap between the two candidates remained at about one percentage point throughout much of the second round. Turnout was 58.9% – some 12% more than in the first round held two weeks ago, which was equally close.

Not only did Grabar-Kitarovic become the first female president of Croatia, she was also the youngest person to take office.

2. She Is Married to Jakov Kitarovic & Has 2 Children

Just as Grabar-Kitarovic made history as the first female president, her husband, Jakov Kitarovic, became the first male to occupy the First Spouse role in Croatia. In 2010, Kitarovic found himself in controversy after allegedly using a Croatian embassy car for personal purposes. Kitarovic graduated from the University of Zagreb from the Faculty of Electrical Engineering and Computing. He also has a nautics degree from the University of Rjeka.

According to T Portal, Kitarovic accepted a job with AD Plasika in 2016. Kitarovic serves as the Corporate Security Adviser for the company, which is the largest Croatian manufacturer of plastic parts for the automotive industry. Kitarovic was previously an IT consultant for Reversing Labs.

According to The Sun, the couple has two children, Katarina and Luka. Katarina is a 17-year-old junior national champion figure skater.

3. The Croatian President Was Named by Forbes as One of the Most Powerful Women in the World

Grabar-Kitarovic’s historic election to office has garnered her honors all over the world. In 2017, Forbes listed her at No. 39 on its Power Women list. Here’s how Forbes described her accomplishments.

The youngest president ever of Croatia as well as the first woman to be elected to the office, Grabar-Kitarovic has continued to make a name for herself on the international stage this year working with President Donald Trump and the U.S. to build an American liquefied natural gas import facility on Croatia’s Krk Island in the Mediterranean, which would deliver up to 2 billion cubic meters of gas a year to be distributed to Western Europe and nearby Baltic nations, which should help ease Europe’s energy dependence on Russia. A former minister of foreign affairs and ambassador to the U.S., she last year visited Iranian President Hassan Rouhani to talk about strengthening diplomatic relations.

4. Grabar-Kitarovic Flew Economy Class to the World Cup & Enjoys Watching the Game From the Stands Rather Than a Luxury Suite

Croatia President @KolindaGK is leading the support in Russia ?? pic.twitter.com/4UQ04arQ6Z

Grabar-Kitarovic is out to prove she is just a regular person. According to the Sputnik News, Grabar-Kitarovic flew economy class on her flight to Russia to enjoy the World Cup festivities. Rather than watching the matches from a suite, Croatia’s president prefers to watch the game from the stands just like a normal fan.

“I am proud of the national team of Croatia, it was a difficult game,” Grabar-Kitarovic explained to Sport Box after the Croatia-Russia match. “The team was under a lot of pressure, but we supported it, and everything turned out well. I wanted to demonstrate that I’m as much a cheerleader as everyone else, to support the team in the circle of fans in the stands. I put on a T-shirt with national symbols, although the dress code in the VIP area, where long dresses are usually accepted, would not allow me to wear such a dress.”

5. She Prefers the Term Equality Over Feminism

While Grabar-Kitarovic was happy her election meant a lot to the women of Croatia, she does not consider herself a feminist. In an interview with Euro News, she explained how she wants equality for everyone.

“I am not a feminist,” Grabar-Kitarovic told Euro News. “I am a person who just wants to see equality, equal treatment for everyone. So yes, I will push for the agenda of promoting women in business, and in political and social life, in public life, but it does not mean that I want women to be advantaged in any way, I just want equal opportunities for everyone.” 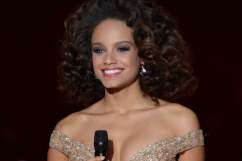 Does Kylian Mbappe Have a Wife? Is He Married?