Former race car driver Danica Patrick is the first female to ever host the ESPYs and she is taking on the opportunity as the emcee of the 2018 awards show. Coincidentally, it was at a previous ESPY Awards that she met her boyfriend, NFL player Aaron Rodgers, according to CBS Sports. The two met in 2012 at the awards show and became friends. Patrick revealed, “We’ve just been sort of friends the whole time, kept in vague touch and seen each other at the ESPYs almost every year, and other places. So one thing led to another, and we realized how similar we were, and yeah, that got the ball rolling.” At the time that the couple met, Patrick was legally married to her ex-husband, Paul Hospenthal.

Patrick also talked about the first exchange she made with Rodgers on Sirius XM’s “Jenny McCarthy Show.” According to the New York Post, she said that, “We remember meeting each other, it was quick … I got his email address, and I remember thinking to myself, ‘Oh, not a phone number? Just an email address?’ … It wasn’t until, obviously, recently that we actually had phone numbers. We referred to each other as Chicago and Green Bay. It was very cute.”

As two athletes, a love of sports is a great bond between Patrick and Rodgers. Patrick explained to CBS Sports, “I wrote a workout, (and) we worked out together and things like that. Put him through some ab workouts. We both just have similar hobbies and interests — the kind of life that we live and wanting to travel and various different things, liking dogs.” Patrick said that their relationship is just easy. She also told 247Sports, “It’s nice. We have a lot of things we can compare and contrast in our worlds of being physical and everything from the fan side, to the media side, to the business side to just the juggling of all things. The emotions of it all. Actually, it has been really nice and helpful in this last transition, reminding me of little things along the way.”

GettyDanica Patrick, driver of the #13 GoDaddy Chevrolet kisses Aaron Rodgers prior to the 102nd Running of the Indianapolis 500 at Indianapolis Motorspeedway on May 27, 2018 in Indianapolis, Indiana.

Recently, Patrick spoke with People and referred to her man as “hot.” And, when she was asked on Jimmy Kimmel Live! if she’d be including Rodgers in her ESPYs hosting gig, she seemed to imply that she may make fun of him. Patrick also said on Extra that Rodgers didn’t want to know much about her monologue or scripted words before the big ESPY Awards. He wanted to be surprised. Patrick dished, “He doesn’t want to watch anything before the show. Aaron wants to watch it cold … I feel like I’m gonna get a very authentic response. And it better be kind no matter what.”

The couple was first revealed to be dating in January 2018.

After the 2018 ESPY Awards, Patrick will have a lot of free time on her hands as she recently retired from racing. Perhaps she will take on more hosting or commentary gigs. Or, perhaps she’ll just embrace spending more time with boyfriend Rodgers. 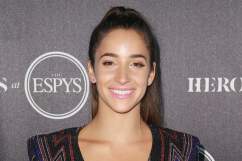