DeMarcus “Boogie” Cousins signing with the Golden State Warriors broke the internet, but he is unlikely to be able to play at the start of the 2018 season. ESPN’s Adrian Wojnarowski reported that Cousins is targeting a December 2018 or January 2019 return as he continues to recover from a torn Achilles. Cousins told The Undefeated in May he was going to be ready by the start of the season, but it appears his recovery is not going as quickly as he initially expected.

“I’m looking forward to starting the season,” Cousins explained to The Undefeated. “That’s my own personal goal, so we’ll see what happens. That’s what I’m working on. The doctors haven’t really given me an answer because of the time I injured myself and the amount of time that I have. It’s basically open field because I have so much time. But for me, I’m shooting to be ready for training camp.”

With JaVale McGee heading to the Lakers to join LeBron James, the Warriors may be in the market for another big man to fill in for Cousins at the start of the season. Cousins injury setback could explain why he was willing to sign a one year, $5.3 million deal with the Warriors given the timid free agent market. When the Pelicans originally traded for Cousins, he was considered a favorite to earn a new max contract when his deal expired.

When Cousins does return, he is likely to play center for the Warriors. Cousins gives the Warriors an all-star at every position in their starting lineup. Yahoo Sports’ Shams Charania report was a little more optimistic, noting Cousins is expected to back towards the beginning of the season.

In Golden State, Cousins will team with four fellow All-Stars in the starting lineup in Stephen Curry, Klay Thompson, Kevin Durant and Draymond Green. Cousins is expected to be healthy for the early part of the regular season, league sources said, but this move signifies his determination to win and an opportunity to ease into the lineup.

Cousins has also played with Durant, Thompson and Green on USA Basketball. The Warriors’ recruitment was led by Green, who has a strong relationship with Cousins, and general manager Bob Myers, and it included a positive phone call between Cousins and coach Steve Kerr, league sources said. Both Cousins and the organization understood the most critical time of the season — the playoffs — will be the stage in which Cousins shines the most for the Warriors.

The Athletic’s Marcus Thompson reported that the Warriors believe Cousins’ personality will fit in with the rest of the Warriors team. Thompson also noted the Warriors were looking for a scoring big man.

Boogie played with Draymond, Klay and Durant on Team USA. Boogie, Draymond and Durant have a good, if not volatile, relationship. Guarantee they will both say Boogie is a good dude who they can keep under wraps…As me and @timkawakami has discussed many times on the Warriors Plus/Minus pod, the Warriors have been wanting a scoring center. They believe that is the next level for the franchise

Here is a look at the play in late January where Cousins sustained the injury. 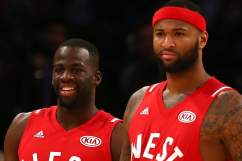