Elin Nordegren is the ex-wife of professional golfer, Tiger Woods. The two split in 2009, but many people often find themselves wondering what exactly happened to Elin Nordegren and where is she now?

These days, Nordegren lives a relatively quiet life in Florida. She is focused on raising her two children, Sam and Charlie, whom she co-parents with Woods. The two were married from 2004 through 2010, and ended up splitting after Nordegren found out that Woods had been unfaithful. With an exposé looming from the National Enquirer, Nordegren found damning text messages on Woods’ cell phone, which resulted in a domestic incident, for which emergency personnel were called. The former model, who hails from Sweden, has moved on from her divorce and has been able to work with Woods to ensure that her children remain a priority in their respective lives.

“I have moved on and I am in a good place. My relationship with Tiger is centered around our children and we are doing really good – we really are – and I am so happy that is the case. He is a great father,” she told People Magazine in 2014.

In recent weeks, Nordegren is believed to have obtained her master’s degree in psychology. She previously earned her bachelor’s degree, graduating from Rollins College in Winter Park, Florida, back in 2014.

Earlier this year, Nordegren listed her home in North Palm Beach, Florida, for sale for $49.5 million. It’s unknown why she decided to list the home for sale, but she likely wanted to downsize. It’s also unknown if any offers have been made or accepted on the property.

Over the past couple of years, she has been romantically linked to Christopher Cline, a coal mining magnate, but the current status of their relationship is unclear. The two were first spotted together in 2013, after having been introduced by mutual friends.

“Elin was introduced to Chris by a local friend because they seem to have a lot in common. They both have children, like to keep their personal lives quiet, believe in philanthropy, and enjoy leisure outdoor activity. They have a nice casual relationship that has blossomed into a romance. Elin is very impressed with him. She thinks he is a cool guy,” a source told People Magazine.

Rumors that Nordegren and Cline split surfaced back in 2014, but the two were subsequently spotted kissing on a ski trip two years later, giving doubt to their rumored split. 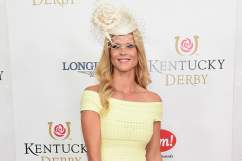