Facebook Josh Hader's family, including his parents and girlfriend.

The Milwaukee Brewers pitcher found himself in the middle of controversy on July 17, 2018 when old offensive tweets attributed to him surfaced. Tweets reportedly included a racial slur, references to white power and the KKK, and a homophobic comment. SBNation reported that the tweets were written in 2011 and 2012, when Josh Hader was a teenager.

1. Hader’s Family Was Given Generic Jerseys to Wear After the Tweets Surfaced

GettySeveral offensive tweets by Brewers pitcher Josh Hader from 2011 and 2012 resurfaced during the 2018 MLB All-Star game.

The tweets surfaced during the All Star Game, which was attended by members of Hader’s family. Hader spoke about the controversy with reporters after the old tweets went viral.

According to USA Today reporter Bob Nightengale, writing on Twitter, “Brewers reliever Josh Hader said his racist and homophobic tweets were a sign of immaturity when he was 17 and plans to apologize to his teammates, saying they don’t reflect on him as a person now. ‘No excuses. I was dumb and stupid.'”

Josh Hader addresses the tweets that surfaced during the game pic.twitter.com/Zzh6uS2frH

Precautions were taken to protect his family from any outrage.

Yahoo Sports columnist Jeff Passan wrote on Twitter, “Some members of Josh Hader’s family, wearing his All-Star replica jersey, have taken them off and been given generic jerseys without his name on the back.” 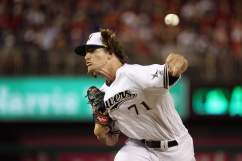 2. Josh Hader’s Dad Was Confident His Son Was in the Majors to Stay

Josh Hader is from Maryland, where his family still lives. According to The Capital Gazette’s Bill Wagner, Tom Hader, Josh’s dad, “was confident his son was in the majors to stay and quickly circled July 25-27 on the calendar.” That was back in 2017.

Why that day? That was the date of a Milwaukee Brewers game with the Washington Nationals in the District of Columbia. Hader’s father “shelled out more than $4,000 to purchase 200 tickets for the July 26 contest,” the newspaper reported. Tom Hader’s Facebook page says he has worked at Win Kelly Chevrolet Buick GMC.

Josh has described his family as supportive and close.

In 2017, Josh Hader told the Milwaukee Journal Sentinel that more than 100 family members showed up to watch him play in DC. “My family getting the opportunity to see me play is just the best thing ever, because of their support. It’s really nice,” Hader said to the Journal Sentinel.

Josh Hader’s dad has filled his Facebook page with photos of his son.

3. Josh Hader Was a Standout Pitcher in High School & Says His Father Pushed Him to Succeed

When Hader’s family takes to the stands, they often wear “Haderade T-shirts,” which, according to The Capital Gazette, is “a term that was coined when the standout pitcher was at Old Mill High.”

“We used to yell ‘Bring on the Haderade,’ whenever Josh went out to the mound,” Tom Hader told the newspaper. Josh Hader is a native of Millersville, Maryland.

Hader told the Journal Sentinel that his dad was his role model, adding, “He pushed me very hard. I’ve always had the dream of being a big-league player and he knew that what it would take to at least get the chance to get to this level.”

Before the All Star Game Twitter controversy, Tom Hader told the Capital Gazette, “I think Josh has his mind in the right place and can pretty much write his own ticket at this point. It’s been amazing to see what he’s doing this season. I’m speechless to be honest.”

4. Hader’s Mom, Patricia, Is Excited by the Fan Attention

The Capital Gazette article noted that Hader’s mom is named Patricia, and she is called Trish. “It’s just awesome to see your son in this type of atmosphere,” Trish Hader said to the Gazette. “Josh has worked so hard and sacrificed so much. He really didn’t have the normal life of a teenager because he was always playing ball. As a mom, it’s really rewarding to see the dream come true for Josh.”

Hader’s mom wrote on one of his Facebook photos, “Sorry! Bubba I can’t be with you today!! I’m there in spirit and rooting for you… Do what you do best and shut em down! I love n miss you bunches.”

She also wrote on Facebook that she works for Orkin Pest Control and is from and lives in Maryland.

5. Hader Is Not Married But He Does Have a Girlfriend Named Maria Macias

Josh Hader doesn’t have a wife as he is not married. However, he does have a girlfriend, and he frequently posts photos of her on Facebook. “?always checking this beaut out!” he wrote with one photo of the couple. Her name is Maria Macias.

In 2016, he wrote on Facebook with a picture of his parents, “Had a great time in San Diego! Glad the fam could enjoy this experience with me. Love you guys — with Tom Hader, Maria Macias and Patricia Patterson-Hader.”