Getty LeBron James does not have plans for a Lakers press conference.

Those hoping to watch LeBron James’ press conference with the Lakers are likely to be disappointed. James’ agency, Klutch Sports, released a one sentence press release on July 2, and it appears this will be the only formal announcement with the Lakers. ESPN’s Dave McMenamin reported there are no plans for a Lakers press conference, and James next public appearance is not scheduled until July 30.

“There will be no further comment or press conference or welcome party for LeBron James in LA, according to a source familiar with his plans. His first public appearance after today’s news will be at the opening of his I Promise School in Akron, Ohio on July 30,” McMenamin tweeted.

“This press release from @KlutchSports on LeBron’s decision to sign with the Lakers will be the only comment for now. No press conference, no videos, this is it,” Windhorst tweeted.

The Lakers front office duo of Magic Johnson and Rob Pelinka are likely to hold a media session at some point. It does not appear that it will be a typical press conference where James is introduced as a Laker. This is a break from James’ tradition of having a big free agency announcement.

Teams typically do not do press conferences until after the signing period begins on July 6. Players and teams can agree in principle to deals beginning on July 1, but cannot sign a contract until July 6. There have been rare occurrences where players have had a change of heart after committing to a team. The last thing an NBA team wants to do is introduce a player prior to signing a legally-binding contract.

James announced he was joining the Heat on a live ESPN special called “The Decision.” When James decided to return to Cleveland, he wrote a letter in Sports Illustrated. This time around, reports indicate James called his agent, Rich Paul, to tell him to contact the Lakers, then James headed out of the country.

In addition to living in Los Angeles where his family has multiple homes, James is said to have found the Lakers brand appealing. He is known for being a fan of storied franchises like the Yankees and Cowboys that have a winning tradition. The Lakers fit that mold. The USA Today reported there were a few key reasons James joined the Lakers.

1. James and his family (wife Savannah, sons LeBron Jr. and Bryce and daughter Zhuri) are excited to live in Los Angeles fulltime. He has two homes there and has spent previous offseasons there.

2. James believes the Lakers are in position – with some of the players they have now – to build a team that can contend for a championship soon. Also, James was not adamant that another All-Star, such as Kawhi Leonard or Paul George, had to join the Lakers for him to sign with the Lakers. He understands they can build and create a contender with him there.

3. If James left Cleveland, it would be for an iconic franchise, and the Lakers are that with their 16 NBA championships and Hall of Famers who have played for the franchise, including some of the game’s all-time greats: Kareem Abdul-Jabbar, Magic Johnson, Jerry West, Elgin Baylor and Wilt Chamberlain. 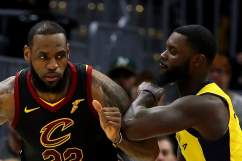