Getty LeBron James and Lance Stephenson are about to be teammates.

The Los Angeles Lakers roster is starting to look very different than it did less than 24 hours ago. Not only have the Lakers agreed to terms with LeBron James, Los Angeles was also aggressive in signing veterans to surround James with. Here’s what we know so far on the Lakers roster and free agent signings.

Kentavious Caldwell-Pope agreed to a one-year, $12 million contract. The Lakers are also going to bring in James’ former nemesis, Lance Stephenson, on a one year, $4.5 million deal. JaVale McGee is also headed to Los Angeles on what is expected to be a small, one-year contract. Keep in mind, the Lakers cannot officially sign any players until July 6 at 12 p.m. Eastern, at the earliest.

Here’s a look at what the Lakers roster looks like with the latest signings.

The status of Julius Randle, who is a restricted free agent, appears in doubt. NBA TV’s David Aldridge reported that Randle does not want to return to Los Angeles.

For next year, Los Angeles projects to have $23M in room if they continue to go the one-year route signing players. Room would increase to $41.3M if the $18.8M Luol Deng contract is traded and $35M if the small forward is stretched over three seasons…. https://t.co/qxMhsmNoh0

Fans may notice a trend to the Lakers signings. With the exception of James, Los Angeles is only bringing in players on one-year deals which allows them to be players in free agency in the summer of 2019. This would change a bit if the Lakers were to trade for Kawhi Leonard, but L.A. would also have to trade salaries in that deal as well.

According to Marks, the Lakers are currently projected to have $23 million in cap space next summer. This could increase to $41.3 million if the Lakers could find a home for Luol Deng. The 2019 free agent class includes Leonard along with other players like Klay Thompson and Jimmy Butler. 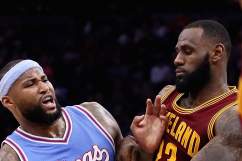 DeMarcus Cousins to Lakers With LeBron James? Not Likely