Vegas Odds: 14 to 1 Woods started the week with Rory McIlroy as the co-favorite to win the 2018 Masters. According to OddsShark, Woods sits at 14 to 1 down from 9 to 1 in the opening week odds. This ties Woods for fifth in the odds, which is a much better play than when he was rising up the board in earlier weeks. Woods is expensive in DFS where he is the fourth highest-priced golfer on DraftKings at $10,000, and also ranks fourth on FanDuel with a $11,500 price tag. Woods is coming off 90 and 89 fantasy point performances on DraftKings. He scored 100 and 89.5 fantasy points in his last two outings on FanDuel. Woods puts fans in an interesting predicament as they choose to go with their head or their heart. It is important to define what your goal is when it comes to Woods. There are few things more satisfying in golf than having a Tiger betting ticket or a DFS lineup featuring him when he is contending in a major tournament on Sunday. If your goal is just to have a lot of fun during the Masters, then go all out with Woods. That said, there are a few things to consider when it comes to Woods' chances to compete this week at Augusta. Woods has not won a tournament since 2013. While Tiger has had success at Augusta, he has not won a green jacket since 2005. Woods has not competed at Augusta since 2015, missing the last two Masters as his back healed. Woods explained to the USA Today that he is finally healthy. “But for some reason, I don't have any pain," Woods told USA Today. "Yes, I'm much tighter, but I don't have any pain. And I've had to really work on the strength. For some reason, it's come back. I wish I could tell you, I wish I knew, but all of a sudden, I have this pop and my body and my speed's back.” Woods does enter Augusta coming off back-to-back top five finishes. The Masters is a step up from either of these tournaments, and will be his biggest test yet to see if he can return to his form of old. I think there's a good chance Woods can finish in the top 5 at Augusta, but backing him for a win is a risky proposition. For all the evidence that points to why Woods faces at uphill battle at Augusta, this is still one of the best golfers of all-time. Given his Masters track record, it would not be surprising if Woods is in contention on Sunday. Woods has won four green jackets, and has 13 top 10 finishes at Augusta over his career. Woods is seventh in total strokes gained, 11th in strokes gained: putting, sixth in strokes gained: around-the-green and 14th in strokes gained: approach-the-green. If anyone can pull off this kind of remarkable comeback, it's Woods. We would all be wise not to bet against him, but the question is whether you should bet for him. No. 6 Rory McIlroy No. 4 Paul Casey No. 3 Dustin Johnson No. 2 Jordan Spieth No. 1 Justin Rose

Tiger Woods shot a 5-under 66 at the 147th Open Championship on Saturday, which has allowed him to get to 5 under overall for the week. Woods has never come from outside the top 5 after 36 holes to win a major championship, but he’s currently in a position to do just that at Carnoustie on Sunday.

Woods’ tee time for tomorrow will be 9:25 a.m. EST, and he is paired with Francesco Molinari. NBC begins their coverage at 7 a.m. EST, and it will also be available to watch on the Golf Channel starting at 4:30 a.m. EST. This marks the first time Woods has made the first cut at the British Open since 2014.

GettyTiger Woods watches his tee shot on the 14th hole during the final practice round.

Woods spent the first two days at Carnoustie playing it safe, as he had when he won the 2006 Open. The results of these two days, however, were not as effective as the golfer would have hoped. “He was hitting into greens from wayyyy back with smaller margins for error and less chances for birdies,” wrote journalist Brendan Porath. “He wasn’t converting a ton of birdie chances playing holes from 200-plus yards away. He posted two even-par rounds.”

“I think it played a little on the quick side out there this afternoon, the balls were definitely rolling and I thought I played a pretty solid round and unfortunately I didn’t take care of both par 5s,” Woods told Golf Channel. “I had 8-iron into both of them, and made par on both of those and had a little three-wiggle there on 13. So the round certainly could’ve been a little bit better.”

GettyTiger Woods is favored to win the Masters

The turning point, according to SB Nation, was when Woods began to take more risks on the green. The golfer is making a concerted effort  at being more aggressive on the green, and using his driver more than usual. He hit five drivers through his first 11 holes on Saturday, a big reason why he’s currently in such a competitive spot. Woods reportedly told the Golf Channel that his aggressive approach was intentional, and that he felt it was the only way to make a legitimate run at the championship.

“It seemed like everybody was shooting six, seven under and I figured I could probably do the same and I needed to with the leaders starting at six. I need to go get it,” said Woods. “It’s one of my better rounds I’ve played. I felt I really had control of the ball. It kept me in the fight. If the guys get to 10 (under), five back is certainly do-able.”

That said, Woods recent spat of injuries have made some commentators hesitant to crown him the favorite. “Tiger’s comeback has been impressive, but he’s not what he once was, and neither are the fields he’s up against,” wrote Golf.com. “As much as he’s overcome in the way of injuries, making his way back into the winner’s circle at a major is an even longer ask.” 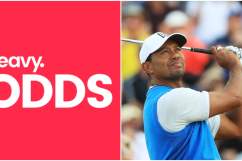