Briony Lyle, the wife of Australian professional golfer Jarrod Lyle, shared sad news about her husband on July 31st, 2018. Jarrod, who was only 36, had been battling leukemia for nearly 20 years. Bri announced on social media that day that Jarrod was ending cancer treatment and had begun end-of-life care.

“My heart breaks as I type this message. Earlier today Jarrod made the decision to stop active treatment and begin palliative care. He has given everything that he’s got to give, and his poor body cannot take anymore. We’ll be taking him closer to home in the next couple of days so he can finally leave the hospital.

Jarrod knows he is loved, and the thousands of prayers and well wishes that have been sent his way have kept him going through some incredibly tough times. But he has reached his limit, and the docs have finally agreed that they can no longer strive for a positive outcome.

My focus as of today is on our girls and doing whatever I can to get them through the challenges ahead. Jarrod will be closer to them very soon, and will spend as much time as he can with them.”

Briony and Jarrod had been married since 2011 and have two young daughters.

1. Jarrod Lyle Said in 2012 That Marriage Was Helping His Golf Game

Briony Lyle married Jarrod in December 2011. The ceremony took place in Shepparton, Australia in his grandparent’s backyard. The long-time couple was already pregnant with their first child.

Jarrod had earned his way back onto the PGA Tour just one week before tying the knot. He told the Sydney Morning Herald that wife Briony was a major benefit to his professional career. “Getting married has definitely calmed me down a little bit and since the wedding I’ve felt really good about my game.”

2. Briony and Jarrod Lyle Welcomed Their First Daughter in March 2012

GettyMELBOURNE, AUSTRALIA – NOVEMBER 11: Jarrod Lyle of Australia walks the course with wife Briony and daughter Lusi during previews ahead of the 2013 Australian Masters at Royal Melbourne Golf Course on November 11, 2013 in Melbourne, Australia.

Briony Lyle gave birth to Lusi Joy in March 2012 in husband Jarrod’s hometown of Shepparton in Victoria. According to an article published by the PGA Tour, Jarrod’s manager commented that Jarrod was “over the moon” and couldn’t stop holding his baby girl.

The arrival of Lusi Joy was a welcome distraction for the professional golfer. Jarrod was about to begin chemotherapy after a reoccurrence of leukemia. Briony’s labor was induced so that her husband could be there to witness the birth. Shortly after, Jarrod began treatment at Royal Melbourne Hospital.

The article also stated that Jarrod had been worried whether he would ever become a father. He was first diagnosed with leukemia when he was 17 years old and was concerned that the chemotherapy may have made him infertile. Luckily, that was not the case and was thrilled when he and Briony became pregnant.

Briony Lyle and Jarrod expanded their family while he was in remission. They welcomed daughter Jemma in June of 2016.

Jarrod Lyle enjoyed bringing his daughters to work with him! He posted the picture above in November of 2016. He was changing Jemma’s diaper right there on the green. He joked on Facebook, “A dirty nappy doesn’t wait for anyone! Wasn’t sure about whether to post this pic – hoping it won’t lead to a DQ! Family life on the Tour. Wouldn’t have it any other way.”

4. Briony Lyle Kept Fans Informed About Her Husband’s Cancer Battle After It Came Back in 2017

Briony Lyle had the job of keeping fans and well-wishers informed of what was happening as her husband battled the cancer for a third time. Jarrod Lyle first beat leukemia when he was 17 years old. He went on to earn his PGA Tour card in 2007 and began his professional golf career.

The cancer returned in 2012, as Briony was close to giving birth to their first daughter Lusi. He beat the leukemia again and returned to the golf course. Lyle competed in 20 PGA competitions and 42 tournaments total during that stretch. He played in his last tournament in May of 2017, at the Western Australia PGA Championship.


GettyMELBOURNE, AUSTRALIA – NOVEMBER 14: Jarrod Lyle of Australia touches his wife Briony Lyle on the chin who holds his daughter Lusi Lyle on the first tee before his shot during round one of the 2013 Australian Masters at Royal Melbourne Golf Course on November 14, 2013 in Melbourne, Australia.

Briony Lyle was by his side for all of it. She was often photographed holding their daughter as they cheered Jarrod on.

Briony and Jarrod Lyle received the news in July 2017 that he unfortunately had relapsed again. The leukemia was back for a third time. He underwent a stem cell transplant in December. Briony shared that the months following the operation were difficult.

She shared on his website in June, “We are both very aware of the amount of drugs and medication that has gone into Jarrod’s body over the years but things are starting to get really scary at the moment. With other patients who have had the same transplant as Jarrod, they are often returning to work after six months. Some days it feels like Jarrod’s health is going backwards…It looks as if this recovery is going to be the longest and hardest one so far.”

5. A GoFundMe Campaign Was Started to Benefit Bri and Jarrod’s Daughters

Jarrod and Briony’s daughters Lusi and Jemma are 6 and 2. A GoFundMe campaign was started August 1, 2018, after the announcement that Jarrod would begin end-of-life care.

The creator of the page wrote that the goal was to give Jarrod a final gift, by showing him how much support his family could count on. The page states: “Jarrod Lyle has fought and won many battles in his young life. He needs our help now to provide a “Hole-In-One” for his girls, Lusi and Jemma and their future education. Please do what you can and let’s give this good man a great final gift!” 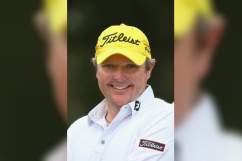 Jarrod Lyle Cause of Death: How Did the Pro Golfer Die?