Professional golfer Jarrod Lyle has died. Lyle was diagnosed with leukemia in July 2017, and had been undergoing aggressive treatment for nearly a year, before making the decision to stop treating the disease.

“It breaks my heart to tell everyone that Jarrod is no longer with us. He passed away peacefully at 8:20 p.m. last night, having spent his final week in Torquay among his family and close friends,” Lyle’s wife, Briony, said in a statement to The Sydney Morning Herald on August 9.

July 2017 marked the third time that Lyle had been diagnosed. The first time was back in 1999, when he was 17 years old. He underwent treatment and was in remission for a few years before the cancer returned. He was able to beat cancer once more, but it returned in 2017, and the treatment was just too much for his body to handle.

On July 31, Lyle’s wife announced that her husband had made the decision to stop undergoing cancer treatment. She posted a heartbreaking message on Facebook, letting her husband’s family, friends, and fans know that Lyle would no longer be at the hospital receiving chemo. The announcement came about six months after Lyle underwent a stem cell transplant, which was very hard on him.

“My heart breaks as I type this message. Earlier today Jarrod made the decision to stop active treatment and begin palliative care. He has given everything that he’s got to give, and his poor body cannot take anymore. We’ll be taking him closer to home in the next couple of days so he can finally leave the hospital,” Briony Lyle wrote in a lengthy Facebook post. You can read it in full below.

Over the past several months, Briony has been posting updates on her husband’s health on his personal website. In one of her recent blog posts, Briony wrote that her husband was a bit of a “mystery” to his doctors.

“Jarrod remains a bit of a mystery to the doctors. He has had several tests and been assessed by different specialists. One diagnosis he has received is optic neuropathy, which means that there is a problem with his optic nerve. The messages from his eyes are not getting through to his brain properly, which can explain the problems with his vision. One result from his lumbar puncture showed some proteins that suggests an auto immune condition, but no other tests are helping to narrow that down. MRIs of his neck, spine and brain are all normal. A recent biopsy indicated that his bone marrow has been affected, but there are no signs of another relapse of leukemia. He is reliant on infusions of blood products to keep his bloods within safe ranges,” the update read in part.

Lyle is survived by his wife and their two daughters, Lusi and Jemma. A GoFundMe page has been set up in an effort to raise money for the young girls’ education. 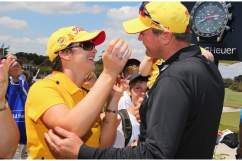