Getty The Dallas Cowboys and San Francisco 49ers kick off their pre-season tonight.

Just when it looked like the Cowboys were going to comfortably win their first preseason matchup, the 49ers had a different idea. San Francisco mounted a late fourth quarter comeback to take their first lead of the night with seconds remaining in the game. The 49ers scored 14 unanswered points in the fourth quarter to end up victorious.

Quarterback Nick Mullens was 11 of 13 in his pass attempts and found rookie wideout Richie James in the end zone for the game-winning touchdown. The 49ers offense was unimpressive in the first half, but the players fighting to make the roster stepped up in the second half.

The Cowboys received impressive outings from a couple of their rookies, wide receiver Michael Gallup and running back Bo Scarbrough. Ezekiel Elliott did not play in the contest, but the Cowboys first team offense was able to march down the field with ease on their first possession.

It is a new-look offense for the Cowboys who released Dez Bryant over the off-season. While the Cowboys failed to bring in any marquee wide receivers, Dallas did make some small moves by trading for Tavon Austin and signing Allen Hurns.

Dallas is also looking to replace legendary tight end Jason Witten who retired. The Cowboys have a few returning receivers led by Cole Beasley and Terrance Williams. The preseason will be a key time for Dallas to evaluate their offense, and who emerges to take a good chunk of Bryant’s targets. With the NFL suspension behind him, a full season of Ezekiel Elliott would mean a lot to Dallas if he can both remain healthy and stay out of trouble.

For the 49ers, all eyes are on Jimmy Garoppolo, who is looking to play his first full season as an NFL starting quarterback. Garoppolo was lights out towards the end of last season, and it will be interesting to watch whether he can sustain this success after NFL teams have had a full off-season to watch film on the young signal caller.

Here’s how the 49ers defeated the Cowboys.

Dak Prescott connected with rookie wide receiver Michael Gallup on a go route for a 30-yard touchdown pass on the first possession of the game. The Cowboys were able to move the ball down the field on a scoring drive that took a little over five minutes. Running back Rod Smith also made several big plays to move the chains. Gallup put up gaudy numbers during his time at Colorado State, and the Cowboys are hoping he can contribute this season.

Why watch Bo Scarbrough’s Cowboys TD from one angle when you can from three? pic.twitter.com/74acrUWCUC

It wasn’t the prettiest looking, but Bo Scarbrough’s one-yard touchdown run gave the Cowboys a 14-0 lead with a little over three minutes remaining in the first half. The first two touchdowns were both scored by rookies. On the same drive, Scabrough did have a more impressive run just a few plays earlier as you can see from the video below.

Joe Williams Put the 49ers on the Board

It was a quiet first half for the 49ers offense, but San Francisco saved their best for last in the first half. The 49ers essentially used their two-minute offense to march down the field, and Joe Williams punched in a one-yard touchdown. The TD made it a one-score game heading into the half.

The Cowboys were not the only team that got big plays from their rookies. Dante Pettis caught a 53-yard pass off play-action from C.J. Beathard early in the third quarter. If the ball had been a little bit better thrown it would have been a touchdown. Pettis was a leading wide receiver for Washington, and one of the best return specialist in NCAA history.

Cowboys receiver Lance Lenoir showed off his route running abilities then caught a Cooper Rush touchdown pass in the back of the end zone. Lenoir had to tap his feet to ensure he was in bounds, and did just that. It was one of the more impressive plays in the game, even though it was a short pass.

Richie James gives the #49ers a 22-21 lead with 18 seconds left in the game! pic.twitter.com/7VSQxwvCfq

Richie James was one of the most impressive players of the night, and came up big when it mattered most. Two former small school players connected to give the 49ers the comeback win. Quarterback Nick Mullens played at Southern Miss, while James was a standout receiver at Middle Tennessee State, a school known for their explosive offense. Mullens found James over the middle of the field with just seconds remaining in the game. James may have been a seventh round pick, but he looked like anything but that on the field Thursday night. 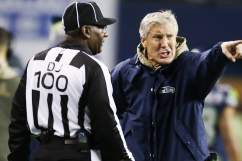