The New England Patriots seem very interested in bringing Eric Decker to Foxborough. Sources say that Decker was spotted at Gillette Stadium, practicing with the Super Bowl champions on Monday.

According to Ian Rapoport, “the Patriots are signing WR Eric Decker, source said. They’ve been in talks for a few days. Will be a one-year deal.”

But while the Patriots organization has not confirmed nor denied rumors that Decker is in talks to join the squad, the team’s female fanbase is ready to bring the handsome wide receiver into their Patriots family.

“Someone confirm for me that there is some hope that Eric Decker is going to the Patriots,” wrote one female Twitter user, adding the heart eyes emoji to her tweet.

“If the Patriots sign Eric decker I won’t be paying attention to the football anymore cause he’s fine AF,” tweeted another.

And then, there were these:

Aside from New England having one of the best teams in the NFL year after year, female fans have seemingly been blessed to have several good looking players to stare at on Sundays. In fact, a Facebook page by the name of New England Patriots Eye Candy Land was created in honor of the good-looking team. The page has more than 90,000 likes. It is often filled with pictures of Patriots players, and many users comment on the good looks of said players.

On Tuesday, the page posted about Decker’s Monday practice at Gillette, and many Facebook users were quick to post their feelings on the matter; of course, no one is unhappy about this rumor.

“Just when I thought there couldn’t be another hottie for our team,” wrote one Facebook user.

“Sa-weet! Fingers crossed ! He sure fits the Pat’s prerequisite of ‘easy on the eyes’ … We do have the best looking team in the league,” wrote another.

“With the loss of Jimmy G and Danny Amendola, we really need this win for the hottie department,” added a third.

Other Patriots players whose looks are often talked about include Tom Brady, Julian Edelman, and Rob Gronkowski. And, while Danny Amendola was traded to Miami in the off season, his photo still makes regular appearances on the aforementioned Facebook page. 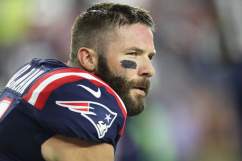 Julian Edelman Girlfriend: Is the Patriots Wide Receiver Dating Anyone?