It’s Saturday, but the world’s best golfers are still finishing up their second rounds of the PGA Championship. A storm rolled through Missouri late Friday afternoon and stopped play at Bellerive Country Club. Most of those near the top of the leaderboard had already finished their second rounds, but some of those in the hunt, like Tiger Woods, were still working through their rounds.

Second round play resumed at 7 a.m. CT. Most players have now finished, but several groups remain on the course. After everyone is finished, third round tee times will be set.

The third round is expected to begin roughly 30 minutes after the completion of the second round. It’s looking like an 11:00 a.m. to 11:30 a.m. local start time.

In order to try and get the third round finished on Saturday, players will go off in groups of three instead of the traditional twosome on weekends on the Tour. Groups will go off of the front and back nines to get everyone on the course as quickly as possible.

If all goes well, Sunday play will be completed as originally intended, without any modifications to tee times or groupings.

The Weather Shouldn’t Impact the Rest of the Weekend

Bellerive took in a half-inch of water on Friday, but besides damp conditions, the weather shouldn’t affect play on Saturday or Sunday. The sun is shining on the course right now. Temperatures could reach close to 90 degrees mid-day, with a top wind speed of 12 MPH. Rain isn’t in the forecast.

On Sunday, there is a 10-percent chance of rain, but otherwise it should be sunny and warm, with temperatures reaching 90 degrees.

How to Watch Third Round Action Online

After the conclusion of TNT’s coverage, CBS will air the rest of Saturday’s action. Given that those near the top of the leaderboard won’t tee off until close to the time coverage switches, the final groups probably won’t finish up until around 7 p.m. ET (6 p.m. local time). 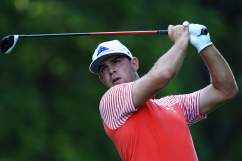 Read More
PGA Tour
Following the rain delay at the PGA Championship, third round play will tee off a bit later than expected. Once all players have completed their second rounds, groupings will be set for third round play this afternoon.