After a middling 2017, Utah State will kick off their 2018 season against Michigan State at the Spartan Stadium in East Lansing, Michigan.

The game is scheduled to start at 7 p.m. ET and will be broadcast on the Big Ten Network. If you don’t have cable or can’t get to a TV, you can still watch a live stream of the game (or DVR it) on your computer, phone or streaming device by signing up for one of the following cable-free, live-TV streaming services:

The Big Ten Network and the Big Ten Network “Extra Football Game channels” (the latter will televise extra games when there are overlapping ones on BTN at the same time) are included in FuboTV’s main package, which includes 85 total channels and is largely tailored towards sports fans. You can sign up for a free 7-day trial right here, and you can then watch a live stream of the game on your computer via the FuboTV website, or on your phone, tablet or streaming device via the FuboTV app.

If you can’t watch live, FuboTV comes with 30 hours of Cloud DVR (with the ability to upgrade to 500 hours), as well as a handy “72-Hour Lookback” feature, which will allow you to watch the game on-demand up to three days after it airs even if you forgot to record it.

In addition to their extensive Netflix-like streaming library, Hulu now also offers a bundle of 50-plus live TV channels, including the Big Ten Network. You can sign up for “Hulu with Live TV” right here, and you can then watch a live stream of the game on your computer via the Hulu website, or on your phone, tablet or streaming device via the Hulu app.

If you can’t watch live, “Hulu with Live TV” also comes with 50 hours of Cloud DVR storage (with the ability to upgrade to “Enhanced Cloud DVR,” which gives you 200 hours of DVR space and the ability to fast forward through commercials).

Additionally, you can watch a live stream of the game on your computer via the Big Ten website, or on your phone, tablet or streaming device via the BTN2Go app. You’ll need to log in to a cable provider to watch this way, but if you don’t have that, you can still sign up for one of the above options and then use your FuboTV or Hulu credentials to sign in and watch on the BTN digital platforms.

A major Achilles Heel for Utah last season was inconsistent defense. The team allowed 26.9 points per game and only yielded 38.9 points on their way to a mediocre 6-7 record. To make matters worse, they also had four games in which they didn’t allow more than 14 points.

Nevertheless, Utah State’s head coach Matt Wells is confident that they can turn things around this year. “I’m really looking forward to this opportunity watching our guys play against one of the best teams in the country,” he said. “This is a team that has Big Ten championship and playoff aspirations, and they certainly have the talent coming back to do that.”

Welles cited the experience of his players as a big reason why they’ve improved. “The difference with us is we don’t have nearly as many first-year starters going into the game as we did last year,” Wells said. “We have more experienced players. Now, does that lead to better play and more points and all that stuff? Obviously, that remains to be seen. But, we’re not nearly as inexperienced going into the game as we were last year.”

This will also be the first meeting between the Utah State and Michigan State, something that Spartans head coach Mark Dantonio is taking very seriously. “You look at Utah State, and you look at Michigan State and both programs, I think Utah State has the third most starters back in the country, and we maybe tie for first or so, so there will be a lot of experience on the football field Friday night, so it will be exciting,” he said. “Their special teams stand out, outstanding punter, and they blocked four punts last year, returned one for a touchdown as well.”

When asked about what he was most anticipating heading into tonight’s game, Dantonio said it was Utah State’s speed. “They make things happen on special teams,” he explained. “They’ll get after you, present a lot of different looks. Offensively, no-huddle type thing. They’re going as fast as anybody in the country.” 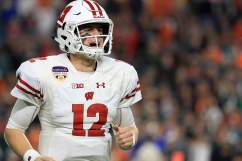 How to Watch Big Ten Network Without Cable [2018]