Getty Antonio Brown is one of the best NFL DFS options for Week 1.

The NFL is back, which means it is time to set your best FanDuel Lineup. I’ve already walked you through my DraftKings pick, and now it is time to go over some NFL lineup advice for FanDuel.

This is the week of the running back with so many rushers offering great value. My recommendation is to play three running backs as Week 1 RB’s have major flex appeal. Le’Veon Bell’s holdout combined with injuries have opened up opportunities for a number of sleeper running backs including James Conner.

Antonio Brown carries a high price tag this week, but for good reason. Brown is ranked as my top FanDuel wideout as the Steelers look to lean on their top offensive weapon without Bell.

GettyPut LeSean McCoy in your FanDuel lineups for Week 1.

LeSean McCoy has not had the best offseason, but DFS is a weekly game so we are concerned with how McCoy will perform this week. With Nathan Peterman starting for the Bills, fans can expect a heavy dose of McCoy as he is by far their best offensive weapon. There is some fear McCoy could be added to the commissioner’s exempt list sometime this season, but the Bills running back has been cleared to play this week. With McCoy’s ability to be utilized in the passing game, I would not be surprised if McCoy has at least 20 touches on Sunday.

Despite some of the legal concerns that surround McCoy, the running back was selected as one of the Bills captains. Bills head coach Sean McDermott noted McCoy’s teammates have a lot of respect for him.

“We have a lot of respect for that [legal] situation,” McDermott told ESPN. “With respect to the captain situation, that was voted on by his teammates, and I think that says a lot about their respect for him as a teammate. I’m proud of him for that, as well.”

As for McCoy, he did not offer much clarity on his legal situation but appears focused on having a big Week 1. McCoy emphasized he is in good shape since he did not take many hits in the preseason.

“I’ll take care of that stuff,” McCoy explained to ESPN. “But right now, the only thing I can worry about is the Baltimore Ravens and keeping everything the same with that. Just focusing in on this big week for me, Week 1. I didn’t have a lot of playing time in the preseason, so I’m really locked in and just trying to focus everything on football right now. But we’ll take care of that.”

McCoy is priced well below the other top running backs at $7,300. The current state of the Ravens defense also does not do much to dissuade me from putting him in my lineup.

As for other runnings backs, James Conner and Christian McCaffrey are next in line for Week 1 on FanDuel. With Bell still a no-show, Conner will get the bulk of the touches for the Steelers. Pro Football Focus graded Conner as the highest rated running back in the NFL during the pre-season. The second-year running back noted he is not feeling any pressure stepping into a bigger role this season.

“No pressure on me,” Conner told ESPN. “There are a lot of people waiting to see how my performance is going to be. As long as we win, I’m cool…[People] are not in my shoes. They might think it’s pressure, but to me it’s just football and doing my job. We’ve been here 8-to-5. It’s just my job. The outside world thinks it’s pressure, but it’s just football. It’s always been that way.”

As for McCaffrey, he is expected to see an uptick in touches this season and faces a Cowboys defense with a lot of holes. The nice thing about McCaffrey is he gets you points in both the run and pass game.

We normally try to steer you towards lower priced players, but it is hard to pass up Brown this week. With Bell out, Brown is likely to get even more targets than normal. While the Browns can only improve upon a win-less 2017 season, Cleveland still has a way to go to improve their offense and defense. Look for Brown to exploit the Cleveland defense. After members of the Steelers offensive line criticized Bell for holding out, Brown has tried to play peacemaker by offering his support for his teammates and Bell.

“No one wins when the family feuds,” Brown explained to Trib Live. “At the end of the day, we are a family. If he’s here or he’s not, we want the best for him. That’s what it’s all about; it’s not about pointing fingers and fighting amongst each other. We are a (close-knit) group; we respect and love each other, regardless of the situation.”

Excluding Week 17, Brown finished the 2017 season with four straight games of 20 or more fantasy points on FanDuel including a 35 and 37-point performance. There are some nice sleepers at other spots where you can make up the value in exchange for Brown’s $9,000 price tag.

T.Y. Hilton and Chris Hogan are my next wide receiver picks. People forget how good Hilton was with Andrew Luck playing quarterback. Hilton can be a bit boom or bust, but you need a few of those type of players to win money in DFS tournaments. Luck is playing his first meaningful minutes in more than a year, and the Colts have a brand new offense. With this in mind, Luck is going to lean on Hilton who is one of the few familiar faces remaining on the offense.

The Patriots had an interesting offseason with their wide receivers. New England traded Brandin Cooks to the Rams, and Julian Edelman is suspended to start the season. That leaves a big opening at WR1, and Hogan is the most likely candidate. Hogan showed off his capabilities in the Super Bowl with six receptions for 128 yards and a touchdown. Hogan also had a four-game stretch at the beginning of last season where he scored 14 or more fantasy points on FanDuel. When Hogan has received the targets (and he should this season), he has proven capable of producing.

Tight end is one of the most difficult spots to fill this week in fantasy football. There is a good chance this position is scarce this season, so it is good to lean on some of the top options until things sort themselves out.

Evan Engram offers good value at $6,000 which is the fifth highest-priced tight end on FanDuel. Many people are skeptical of Engram with the return of Odell Beckham Jr. along with the addition of Saquon Barkley. These weapons could end up opening more opportunities for Engram as the defense has to cover the entire field. 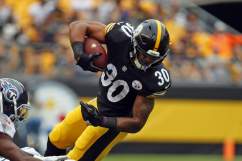