In January of 2001, Rae Carruth was convicted of conspiring to murder the mother of his unborn child, Cherica Adams, and was forced to serve a mandatory prison sentence of 18-24 years. Now, the former Carolina Panthers wideout is officially free after serving just under 18 years in Sampson Correctional Institution in Clinton, North Carolina.

Despite the media presence at the corrections facility following his release, Carruth left the establishment without speaking to reporters, according to CBSSports. Rae Carruth will immediately begin a nine-month post-release program before being reinserted into society. 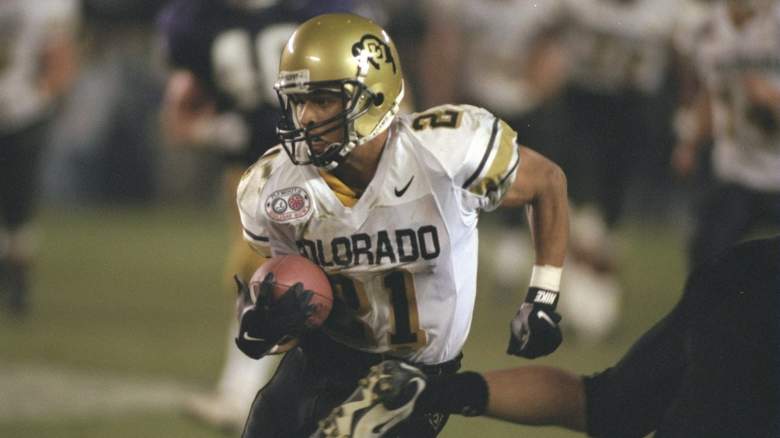 Prior to being drafted 27th overall in the 1997 NFL Draft by the Carolina Panthers, Carruth had a rather impressive stint playing football collegiately for the University of Colorado. The wide receiver was able to acquire 2,736 yards from scrimmage for 22 touchdowns while averaging 18.8 yards per reception in four years with the Colorado Buffaloes.

It appeared that Rae Carruth was going to continue his promising career as a football player in the NFL as an elite wide receiver but was cut short due to the shocking discovery of his murder-for-hire conspiracy that landed him behind bars for nearly two decades.

According to court documents, the then 25-year-old Rae Carruth paid assassin, Van Brett Watkins a lump sum of $6,000 to murder the then-pregnant Cherica Adams. Watkins shot the young mother to be a total of four times before fleeing the scene. Fortunately, Adams was able to implicate Carruth intent to kill via a 911 call before falling into a coma.

An emergency cesarean section was performed in order to deliver the unborn child who is now 18-year-old Chancellor Lee Adams. Sadly, Cherica Adams passed away less than a month later and Chancellor suffered complications from oxygen deprivation resulting in permanent brain damage and cerebral palsy.

In November 1999, Rae Carruth was found guilty of plotting the murder of Cherica Adams resulting in his 18-24 year conviction. Van Brett Watkins pled guilty to second-degree murder and won’t be eligible for release until 2046.

In the past, Carruth has stated that he wanted to be apart of his child’s life despite the heinous actions on his own behalf. Now, the striving 18-year-old Chancellor Lee Adams has become the rising sun out of this tragic narrative. Saundra Adams, the mother of Cherica Adams, has raised Chancellor to be the bright and beautiful young man that he is today.

Unfortunately, both Saundra and Chancellor were not able to greet Rae Carruth as he was being released from the Sampson Correctional Institution today. Hopefully, Saundra, Rae, and Chancellor will have the opportunity to develop a positive relationship as time moves forward.