Ryan Day is the head coach of the Ohio State University football team.

Day joined the Ohio State roster in 2017 as an offensive coordinator. Prior to his most recent promotion, Day had signed a contract to stay with the Buckeyes through 2021. His base salary was more than $800,000 plus bonuses.

1. Ryan Day Has Agreed to a Five-Year Contract With Ohio State & Will Earn $4.5M Per Year For Five Years

SOURCE: New #OhioState head coach Ryan Day has agreed to a five-year contract with the Buckeyes.

Ryan Day was named the Buckeyes’ head coach on January 2, 2019. He reportedly agreed to a five-year deal. Fox Sports reporter Bruce Feldman was the first to report that Day and Ohio State had reached a multi-year contract.

According to the Ohio State University newspaper the Lantern, Day will earn $4.5 million per year. That includes a base salary of $850,000. He’ll earn an additional $2.39 million for media appearances and public relations purposes. An equipment deal adds $1.25 million. Day’s contract also guarantees retention payments of $250,000 in 2022 and 2024.

Ohio State had already shown a willingness to reach deeper into its pockets to keep Day. In January 2018, it was reported that Ryan Day had been offered the job of offensive coordinator for the Tennessee Titans. But he chose to remain with Ohio State following a substantial increase in his salary.

Day’s base salary was set at $810,000. But the contract also stipulates that his compensation could steadily increase. “Coach shall be eligible to receive Base Salary increases, as may be determined appropriate by the Director and approved by Ohio State’s Board of Trustees, on or after February 1, 2019.”

During the 2018 season, Day also added $478,000 to his regular salary. According to the Ohio State student newspaper, the Lantern, Day earned that extra compensation for the three games he filled in as head coach.

3. Ryan Day Was Eligible for Significant Bonuses Based on the Team’s Performance & Also Received Extra Compensation for Media Appearances

GettyRyan Day is expected to be the next Ohio State head coach when Urban Meyer retires.

Ryan Day’s 2018-2021 contract with Ohio State stipulated that in addition to his $810,000 base salary, he would receive substantial bonuses if the football team achieved certain titles.

The contract also stipulates that an appearance at a post-season bowl game earned Day a bonus equaling 4.25% of his base pay. A season with nine wins on the board would net an extra 4.25% bonus. And an appearance in the semi-finals of the College Football Playoffs (which Ohio State just narrowly missed out on for the 2018 season) would have garnered Day a bonus of 21.25% of his salary, which would have equaled at least $170,000. A national championship would have earned Day a 25% bonus.

Other benefits included a $600 monthly stipend for vehicle expenses. He also received six free tickets to each Ohio State home game, which could be given to family and friends. The contract also grants Day two tickets to each home basketball game.

The most successful professional athletes make headlines when they enter into multi-million dollar endorsement deals. But just like college athletes, coaches are also prohibited from these kinds of extra contracts.

Ryan Day’s previous contract stipulates that he receives $190,000 “in consideration of Coach’s services related to media, promotions and public relations.” He is also prohibited from accepting gifts or payments from any organization other than Ohio State.

5. Ryan Day & His Wife Owns a Home in Powell, an Affluent Suburb Located a Few Miles North of Columbus

Ryan Day and wife Christina decided to purchase a home in the Columbus suburb of Powell when they arrived in the Buckeye State. It’s located about 12 miles north of Ohio State University in Delaware County.

Day shared in an interview with 247Sports in August 2018 that he and the family adjusted well to the area. “We love it. We are in Powell. What a great community. The kids were able to jump right in and the people embraced them. Buckeye Nation embraced them right when we got here.”

Day and his wife Christina may have purchased their home under a different name. A search of the Delaware County auditor’s website, which lists property searches by owner name or address, does not reveal any homes owned by Ryan Day. A search using Christina’s maiden name of Spirou also does not yield any results. 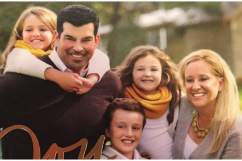