Getty Mitch Trubisky pictured with his parents at the 2017 NFL Draft.

Mitch Trubisky has been a big part of the Chicago Bears recent success, but it was his family that helped him realize his NFL dreams. Mitch’s parents, Dave and Jeanne Trubisky, saw their son rise from a relatively unknown quarterback at North Carolina to one of the top NFL prospects back in 2017.

Mitch grew up in Mentor, Ohio. Even though Mitch now lives in Chicago, he still stays involved in his hometown. Mitch runs a football camp in Mentor every offseason.

“I helped out (with the camp) when I was in high school, I came back when I was in college, and I’ll keep coming back now that I’m in the NFL,” Mitch told the News-Herald. “I plan to keep giving back to the community that gave me so much, and continue to promote the Mentor football program…To have this support from my community, and have these kids come out here means the world to me. This is the camp I looked forward to every year growing up. It really shaped me. It taught me to work hard, listen to your coaches and be a great teammate. It all started here.”

Learn more about the Trubisky family.

Football runs in the Trubisky family. According to Sports Illustrated, his parents met as flag football teammates at the University of Akron. Jeanne and Dave bonded over their love of sports. Jeanne played four sports in high school while Dave participated in three.

The couple debates who Mitch get his athleticism from.

“[Jeanne] always says he gets the athleticism from her. We’ll let that one go,” Dave told The News-Herald. “I have some input, but I let that one go.”

2. Mitch Wears No. 10 Because It Was His Dad’s High School Number

Mitch wore the No. 10 at North Carolina as a way to honor his father, Dave, who wore the same number in high school. Dave coached Mitch when he was just seven years old.

Dave was a star high school quarterback in Ohio but admits that his son has surpassed him on the football field. According to The News-Herald, Dave had Division III offers but declined to play football to focus on earning his engineering degree.

3. His Mom Prefers the Name Mitchell Over Mitch

There was quite a controversy at the 2017 NFL combine. It centered around the terms Mitch and Mitchell as some outlets noted Mitch had new demands to be called Mitchell. Mitch explained it was all a simple misunderstanding.

He spoke with the Sporting News about the incident.

Someone asked me what my mom preferred and that was the answer. She prefers Mitchell. It doesn’t bother me if you call me Mitch because a lot of people call me Mitch, including my teammates. They both sound good.

I was trying to do my mom a favor and it actually made her happy. So, despite the media whirlwind that it kicked up into, my mom was happy. If I can do that for my mom, I really don’t care.

4. Mitch Has Two Brothers & a Sister

Merry Christmas from mine to yours!

Manning plays wide receiver and had 706 receiving yards along with 11 touchdowns his senior year. Mason plays with Manning on Mentor’s basketball team.

5. Mitch’s Dad Sends His Son a Text Before Every Game

Nothing better than family.

According to the Chicago Tribune, Mitch’s dad sends his son a text before every game. It is a tradition that started in high school and has now followed Mitch throughout his career. Mitch has become superstitious about the texts per The Chicago Tribune.

By now, Dave’s text message to his son is so ingrained in their pregame routine that it has become superstition. On the receiving end, Mitch has a great appreciation for how his father, as well as his mother, Jeanne, helped mold him into the star college player and amiable, loyal person who arrived at Halas Hall this spring.

Mitch spoke about what it was like to carry on this tradition with his father.

“One of the most real, genuine things in this world is love for your family, your parents,” Mitch told The Chicago Tribune. “Especially my dad, if I just give my all, knowing that it makes him proud, it just makes me want to strive for that much more. Sharing these moments and that happiness together is really special.” 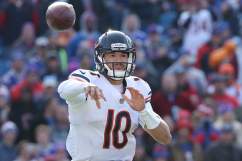 Does Mitch Trubisky Have a Girlfriend? Is Bears QB Dating Anyone?