Getty Former NFL QB Christian Hackenberg is the quarterback for the Birmingham Iron.

AAF players are all on three-year, $250,000 non-guaranteed contracts, and their first year’s salary starts at $70,000, per CBS Sports. Where the real money appears to be in the Alliance of American Football is with the coaches. The AAF has invested heavily in former NFL and college football coaches in an attempt to jumpstart the league.

While the AAF coaches’ salaries have not been officially disclosed, the Sporting News reported the league was planning on paying coaches a $500,000 salary. This could be a big reason the league was able to lure coaches like Steve Spurrier out of retirement.

AAF players will make $80,000 in the second season and $100,000 in the third year. Players also have financial incentives to make more money based on performance both and off the field.

“So we’ve designed a system that we think is reflective of the modern era where players literally make limitless amounts of money if they engage with our platform in the right way with their fans,” AAF co-founder Charlie Ebersol told CBS Sports. “One of the things that I think the mistake has been is that as professional sports have gotten bigger and bigger, the players have seen their salaries grow to a degree and then stagnate while the valuations of franchises have exploded. So what we looked to do is create a dynamic system in which the player is rewarded.”

Not only do the AAF contracts include incentives for players to make more than their base salary, there is an education and healthcare component as well. Players that play a full season will receive health insurance, per Football Scoop.

The AAF also plans to offer a health insurance and education stipends to players who complete a full season in the league.

AAF Players Can Leave for the NFL at Any Time

The goal of the AAF is not to compete with the NFL, but develop players, coaches and front office executives that can eventually move up to the league. With that in mind, AAF players can leave for the NFL at any time regardless of their contract. The AAF season ends in time for players to join an NFL team for training camp if they are picked up.

Ebersol consistently cites Kurt Warner as the model for the new league. Warner dominated the Arena Football League and earned himself an NFL opportunity.

“There are 28,000 Division I football players. Only 1,700 have NFL jobs,” Ebersol told ESPN. “We’re looking for those Kurt Warners working in grocery stores, and we think we will find them.”

AAF Players Can Make Money Off of Fantasy Football

Ebersol noted that players will be allowed to make money off of things like fantasy football. This sounds like it is more of a future goal given the AAF app does not currently offer fantasy football, but the idea is to give players a bonus based on people adding them to their fantasy football team.

“We have built a digital platform that is the most robust in professional sports, which allows players to be bonus-ed off of fan interaction,” Ebersol noted to CBS Sports. “So if a fan picks a player on a fantasy platform or in a bet – and you’ll be able to have in-game betting on our platform – the players actually make money on top of their regular-season salary, which is as high or just short of the NFL practice-squad salary. They’ll be able to make money every time they get picked on a fantasy team, every time they get picked on a bet, every time a fan likes them on Facebook.” 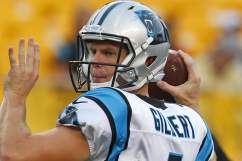 AAF Rules: What Is the Difference in NFL vs. the Alliance of American Football?