Gladys Knight is the Empress of Soul and she has made a name for herself with hit songs like “Midnight Train to Georgia.” But, she has also had quite the personal life. Knight has been married four times and is currently married to her spouse William McDowell, who she married in 2001. Knight is also a mother of three. Get to know more about her kids and her exes below.

James Newman was Knight’s first husband and they were married from 1960 – 1973. At just 16 years old, Knight became pregnant and married Newman, who was also called “Jimmy”. Though the pregnancy ended in a miscarriage, the couple went on to have two children together, as reported by the Chicago Tribune. Biography.com reported that Newman was a musician who became a drug addict and reportedly left the family just four years into the marriage. Knight retired from touring to start raising their kids and separated from Newman, though she didn’t actually divorce him until years later. Newman died a few years after the divorce.

Knight’s son from her marriage with Newman managed her career through his own company, titled Newman Management Inc. until he died of heart failure on July 10, 1999. According to the Las Vegas Sun, he was only 36 years old at the time of his death. 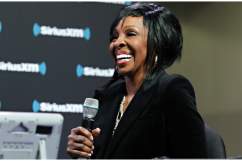 One year after divorcing first husband Newman, Knight married her second husband, Barry Hankerson. Later in his career, Hankerson founded Blackground Records, as he was also in the music business. In his career, some of the artists who Hankerson has managed include Aaliyah, Toni Braxton and R. Kelly.

Together, Knight and Hankerson had a son named Shanga. The couple divorced five years after marrying, in 1979. Hankerson also has a son named Jomo Hankerson from a previous relationship. According to AJC, Hankerson and Knight went through a nasty custody battle when they got divorced.

Les Brown was the third ex-husband of Gladys Knight and the two married in 1995, but divorced just two years later. Brown was a motivational speaker. Despite all the break ups, after Knight’s divorce from Brown, she told SF Gate that, “I know those challenges that come up from time to time in life are our little learning tools, our little steppingstones. If we didn’t have those things in our life, how would we learn anything? We would just be walking around like nothing. We need those obstacles in our life because I know one thing — I’m a much better person for them. And I ain’t even mad at nobody.”

My husband and I at the White House for the last dinner @barackobama & @michelleobama Job well done, we love you!?? pic.twitter.com/5hI5v0bluK

It looks like in 2001, Gladys Knight found a love that would last when she married husband William McDowell, who she is still married to today.

In an interview with SF Gate in 2001, Knight talked about love after being divorced three times and she said, “Love is what makes the world go around. I know it’s a big cliche to use, but it is the absolute truth. There is nothing else like it. I know that is what everybody is striving to feel, in relationships, in brother- and sisterhood and in all of the things that we aspire to have in our lives.”