Getty Kyler Murray will be drafted in the first round in both the MLB and NFL.

Kyler Murray has committed to playing NFL football, but fans are still wondering if the quarterback will try to play baseball as well. Murray originally signed a contract with the A’s after being selected with the No. 9 pick in the MLB draft.

Murray was permitted to play one college football season, but Murray opted to declare for the draft instead of reporting to the A’s this spring. Oakland upped their offer to try to convince Murray to stick with baseball but was unsuccessful, per Sports Illustrated.

Here’s what Murray wasn’t disclosing, though. According to a source close to the family, the A’s contingent that visited Kyler in January offered him a contract worth $14 million in guaranteed cash, in addition to his signing bonus. (The deal would have required that Oakland take the extreme step of adding Murray to its 40-man roster and would have paid out a figure similar to that of a top 10 NFL draft pick. For context, Bears linebacker Roquan Smith, who went eighth in 2018, signed a four-year deal worth $18.5 million.) But Kyler turned down that offer, and his family has kept those financials out of the media.

Even if Murray wanted to play both sports, the logistics are difficult as the schedules overlap in September and October. NFL training camps typically start in July, and Murray plays quarterback meaning it is impossible for him to miss practices in favor of playing baseball.

We have seen players like Deion Sanders play both baseball and football for a short time. However, it would be a much more difficult feat for Murray to do so as a quarterback rather than cornerback.

Leading up to the draft, Murray’s messaging has been how he is completely focused on football. Murray and Nike teamed up to release a commercial.

“I’ve always dreamed of being a professional athlete,” Murray said in the ad, per Sports Illustrated. “But honestly, I want to be the best that ever played the game.”

The bigger question is not whether Murray will play both, but if he could switch back to baseball if his NFL career does not go as planned. If Murray did decide to play in MLB, the A’s would have his rights since they drafted him in 2018. The fact that Murray did not announce his NFL intentions until recently has some wondering if Murray would still like to play baseball as Sports Illustrated detailed.

Altogether, it’s enough to make you wonder, What does Kyler Murray really want? For the most talented multisport athlete of his generation, will the NFL be a tryout or an obsession?

“As a kid my whole dream was to win Super Bowls and play QB in the NFL,” he says. “For me it was always football. But at the same time it wasn’t.” 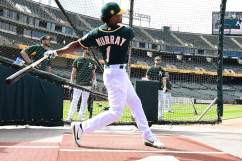 Kyler Murray’s Baseball Contract: How Much Money Did He Make in MLB?

Read More
Football, NFL, NFL Draft
Will Kyler Murray still play baseball and football after he is drafted? Find out if both the NFL and MLB are in Murray's plans.