Russell Westbrook and wife, Nina Westbrook, welcomed twin daughters on November 17, 2018. Since then, Nina’s Instagram is full of adorable photos of their new additions.

The couple is now the proud parents of three children: Noah, Skye and Jordyn. Russell and Nina met at UCLA where they were both basketball players. Here is how UCLA athletics described Nina’s game.

Can play all positions on the floor. One of fastest players on team; excels in transition. Gets after it on the defensive end

Nina is a family therapist and founder of the company The Little Ark, a community space and boutique aimed at families. Nina described the vision for the space on The Little Ark’s website.

“I am always looking for new and fun things to do with my son, so I wanted to create a space in the community where parents and their tots could join together for some constructive play time,” Nina noted on The Little Ark’s website. “I also happen to like shopping, so it made sense to add the shopping component where anyone can shop for a wide range of curated items and gifts their family and friends.”

Nina’s background is in clinical psychology with a specialization in marriage and family therapy. Here is an excerpt about Nina’s experience via Little Ark.

Nina Westbrook is a Wife, Mother, Marriage and Family Therapist, and the Founder of The Little Ark. Nina is passionate about family, friends, helping others to achieve personal growth, food, fashion, and new experiences. Nina has dedicated most of her professional life nurturing and assisting others to fulfill their emotional and psychological needs…Nina went on to receive her master in arts in Clinical Psychology with a specialization in Marriage and Family Therapy.

After the couple’s first child, Russell told Time that fatherhood was “amazing.” Given Russell’s role as an NBA superstar, he is frequently on the road which means he sacrifices time with his family.

“The FOMO [fear of missing out] is a big thing for me. I never used to have that problem, but I’ve got it now,” Russell told ESPN in 2017. “This season we were on the road a lot early. We’d go on a three-game road trip and then come back, then go another five or six games. My wife does a great job of constantly keeping me updated. But that’s my biggest thing — ‘Ah, I’m missing something.’ That’s why when I get home I’m all, ‘Noah, let’s do whatever.'”

Russell admitted to having FOMO when the couple had just one kid, so this has likely kicked into high gear with the addition of their two daughters. Nina also seems pleased with her role as a mother.

“Mornings in the Westbrook household. I’m not sure what I did to deserve all of this..Thank you God. ?,” Nina posted on Instagram along with a video of their child. 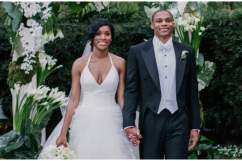